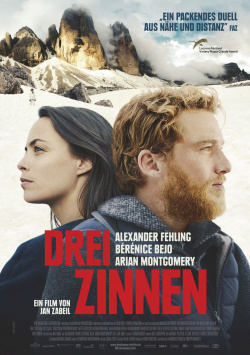 Aaron (Alexander Fehling) is happy with the Frenchwoman Lea (Bérénice Bejo) since two years. For two years he has also been trying to be a good father figure for Lea's son Tristan (Arian Montgomery). But he is still too attached to his father George, whom Lea left for Aaron. With much affection, Aaron tries to win the boy's love - and there are always small moments when he even seems to succeed. A joint holiday in a mountain hut in the Dolomites is supposed to finally weld the three together. But more and more Aaron realizes that he is not wanted as a second father - neither by Tristan, nor by Lea. To save the situation, he wants to walk alone with the boy to the Three Peaks. But this idea soon proves to be a fatal mistake…

With "Drei Zinnen" director Jan Zabeil has staged an atmospheric drama that can score with strong actors, some very moving moments and a depressing atmosphere. When Tristan Aaron, for example, whispers a hesitant "Papa" in his ear, then Alexander Fehling's play makes absolutely clear what meaning this little word has for Aaron. The viewer can understand why he is so concerned about the boy and why he is so frustrated when Tristan is constantly on the phone with his biological father and then distances himself from Aaron. At the same time also the dilemma of the boy becomes clear. On the one hand he likes Aaron and he enjoys that he really cares for him sacrificially. But to show him too much affection would be like betraying his father and the boy cannot bear it.

Secretly he still hopes that Aaron is only a phase and that his parents will find each other again. Zabeil succeeds very well in establishing this conflict in a few words and credibly expanding it. However, he also gets lost in many very lengthy scenes, in which not much really happens and which achieve the opposite of what they intend. Instead of condensing the atmosphere, they unnecessarily slow down the drama and actually only pull at the nerves of the audience.

The last act about which we don't want to reveal too much here also leaves us with an ambivalent feeling. On the one hand, the director doesn't make any compromises, which is as disturbing as it is interesting. On the other hand, the outbreak of the conflict seems to be very constructed and a bit too thick, which doesn't really fit into the completely withdrawn staging of the rest of the movie. "Three Peaks" is at times a very gripping and psychologically exciting drama, but at the end it is crushed by its own ambitions. The pictures and the good actors make up for much of it, but unfortunately not everything. And that's why there is only one left with restrictions: Worth seeing!