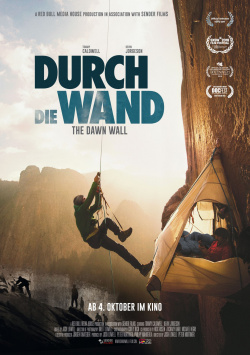 Even as a child Tommy Caldwell, son of a mountain guide, was a passionate climber and as a teenager he won one competition after another. But life put some heavy stones in his way. On a climbing expedition in Central Asia, he and his companions were taken hostage by Islamist rebels - an experience that was difficult to process. When he returned home after liberation, the next stroke of fate followed: an accident with a circular saw caused him to lose his index finger - which would actually mean the end for a climber. Not for Tommy Caldwell. He continues to train doggedly - with one goal: to climb the Dawn Wall, a kilometre-high rock face in Yosemite National Park.

Caldwell has teamed up with Kevin Jorgeson for this venture. The two of them have been preparing for the company for years. And in January 2015 the time will finally come. With worldwide media interest, the two men climb meter by meter for almost three weeks to achieve what nobody before them has managed to do. The two filmmakers Josh Lowell and Peter Mortimer documented this in "Durch die Wand". With the help of elaborately developed rope systems, the film crew was able to get very close to the two climbers and capture truly spectacular images.

These are sometimes dizzyingly good. As a spectator, you feverishly watch every metre to see whether the two of them will succeed in conquering the wall. In these moments the documentation can only be described as successful. Dramaturgically speaking, however, it's a bit too thick, which makes the first act, which is about Tommy Caldwell's youth and the hostage-taking, a bit tenacious. As soon as the film concentrates only on overcoming the Dawn Wall, the whole thing is extremely exciting and stirring.

Although it will never become clear to me personally why some people expect such life-threatening exertions from themselves, one does get a lot of respect for the two extreme athletes in the course of the film. The great pictures captured during the three-week climb make it absolutely worthwhile to watch this film on the big screen. And that's why it's very clear: Worth seeing!