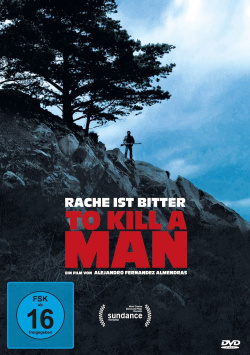 Film: After Jorge (Daniel Candia) is attacked by a group of criminals in his neighbourhood and his wallet and blood glucose meter are stolen from him, his son Jorgito (Ariel Mateluna) wants to retrieve the device from the leader of the gang, which is so important for his father. This leads to an argument in which Jorgito is so badly injured that he falls into a coma. The perpetrator, however, gets away with a short prison sentence. As soon as he does, he begins to terrorize Jorge's family. Although Jorge and his wife keep turning to the police, the man remains at large. When the judiciary remains inactive even when Jorge's daughter is assaulted, the frightened family man decides to take the law into his own hands...

To kill a man" by Alejandro Fernandez Almendras is a classic revenge thriller. But what distinguishes this film from other representatives of its genre is its very reserved staging. Almendras deliberately refrains from manipulating the emotions of the audience too much to perhaps justify the revenge of the common man as soon as the legal system fails. Rather, with his reduced, almost documentary narrative style, he wants to devote himself to the question of what an act of revenge of the psyche of people who are actually not violent would entail. What happens when a person, who is always a victim, is suddenly forced into the role of the perpetrator? And can killing for revenge really be justified?

The film doesn't offer any real answers, because that would make it a little too easy for Almendras. That is why he rather subtly, often only hints at what the constant terror has on Jorge and his family, how he is finally urged to take the law into his own hands and how he tries to live with the consequences of his actions. Especially since the staging doesn't use too striking moments and just doesn't show many things at all, the depressing atmosphere of the movie seems even more difficult. This makes the film very difficult to access for a broad audience. But if you can get involved with it, you will quickly be captivated by this intense slowness and won't let go until the very consequent finale.

"To kill a man" is an in many ways uncomfortable movie, that makes you angry and thoughtful. Thus, even after the quite short running time, the viewer isn't let go for a long time. The film raises many social and moral questions and also offers a really exciting story. Anyone who can get involved with the very worn, unagitated staging will be offered a very special kind of stirring tension cinema. And that's why there is a deserved one here: Worth seeing!

Picture + sound: The fact that the visual realization of the DVD makes the film appear somewhat cool hits the oppressive mood of the story perfectly. The overall image sharpness is at a good level, although there are always minor weak points to be discovered in the detail display. The sound mix corresponds perfectly to the style of the production and is therefore extremely reserved and almost minimalistic. The dialogues are mixed in a way that is easy to understand and slight ambient noises also ensure that a little movement can be detected in the surround area. Good!

Extras: Besides the trailer and a very interesting interview with director Alejandro Fernandez Almendras (ca. 19:15 min.) the DVD also has a making of (ca. 14:21 min.) consisting of footage from the shooting as well as eight edited and extended scenes (ca. 17:03 min.). Gut!

Fazit: "To kill a man" is a very reservedly staged and therefore extremely effective revenge drama, which reaches its real strength only by the consequent finale. Without many words, director Alejandro Fernandez Almendras has created a truly gripping lesson about revenge and its consequences, which lovers of demanding genre cinemas shouldn't miss. The technically well done DVD has longer edited scenes besides the main movie, as well as a very informative interview with the director. Recommended!