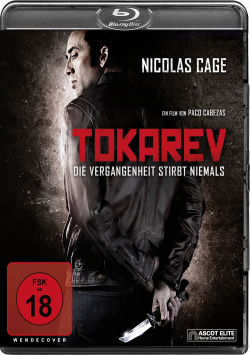 Contents: It was a hard road, but Paul Maguire (Nicolas Cage) has managed to turn his back on his former life as a criminal and become a respected member of society. As a respected businessman he leads a contemplative existence with his daughter Caitlin (Aubrey Peeples) and his new wife Vanessa (Rachel Nichols). But then his life is completely out of joint when Caitlin is kidnapped and found a little later, executed with a head shot from a Russian Tokarev TT33 pistol. For Paul it is clear that his past has caught up with him and that obviously someone still has an old score to settle. Together with his best friends Kane (Max Ryan) and Danny (Michael McGrady) he does everything to find out who killed his beloved daughter. Although his old friend Francis (Peter Stormare) begs him not to pursue his feelings of revenge and to leave the investigation to the police, Paul starts a bloody revenge campaign which threatens to end in a catastrophe...

"Tokarev" is the story of a man who has used his second chance, but who is caught up by his past in a particularly cruel way, which also puts his new found righteousness to a hard test. In the style of "A man sees red" or "96 Hours", Nicolas Cage is allowed to mutate into a self-appointed revenge angel in the face of a family tragedy. For long stretches director Paco Cabezas seems to have staged a very conventional self-justice thriller, which follows the rules of the genre very closely. The boundaries between right and wrong, between good and evil, blur here just as they do in many other comparable works. And you almost want to check the whole thing off as "all seen already", if it weren't for the last act, which makes the story and the moral question appear in a completely new light.

Dramaturgically the thriller can be called absolutely successful. The visual implementation is also very atmospheric, which supports the already good tension. The action sequences are a bit too blurred, but still well executed. And also the actors deliver quite convincing performances. Even veterans such as Danny Glover ("Lethal Weapon"), Peter Stormare and also leading actor Nicolas Cage can't show any award-winning portrayals. The figures are drawn a little too one-dimensional for that. But even though some scenes are a bit wooden, the actors leave a positive overall impression.

The only real weakness of the movie is the script. The dialogues in some scenes are extremely flat and interspersed with clichéd phrases, which of course also has effects on the actors and on the general entertainment value of the thriller. But the latter is so solid in its foundations that even such a weakness cannot harm it sustainably. "Tokarev" is despite the rather weak script a good, thrilling and thrillingly staged thriller with a surprising ending, that may seem a bit constructed, but can still have an effect. Those who like movies like "96 Hours" should also give this successful home cinema premiere a chance. Worth seeing!

Picture + sound: The very gloomy event was realized on the Blu-ray in adequate picture and sound quality. The colour scheme is very atmospheric, the sharpness of the image is also on a good to very good level in the dark sequences and the contrasts as well as the black values are well balanced. The DTS-HD Master Audio 5.1 Mix is especially lively in the more action-packed scenes and convinces with its powerfully mixed dialogues and some well-placed surround effects. Good!

Extras: The bonus offer of the Blu-ray starts with a very enthusiastic audio commentary by director Paco Cabezas, which, however, is sometimes a bit difficult to understand due to the somewhat tinny sound and the accent of the filmmaker. Unfortunately, subtitles are not offered for this comment. If you are interested in the backgrounds of the production, you should still listen here.

Besides the trailer, eleven interviews (approx. 36:18 min, with optional UT) and uncommented B-Roll shots from the shooting (approx. 30:59 min, without UT), the Blu-ray also has some cancelled scenes (approx. 22:22 min, without UT) on offer. This also includes an alternative start, an extended end sequence, and an alternative end. However, this turns out to be a small deceptive package. Because the 10:50 min. running time of this alternative end consists primarily of the credits, which are shown here again for inexplicable reasons. The actual ending only runs for a few moments and differs only marginally from the actual finale.

Fazit: "Tokarev" is a decent revenge thriller, which doesn't offer any real best performances by its good cast, but can offer an atmospheric look, good action and a quite thrilling story. Blu-ray presents the film in harmonious picture and sound quality and also offers almost 90 minutes of bonus material. Recommended