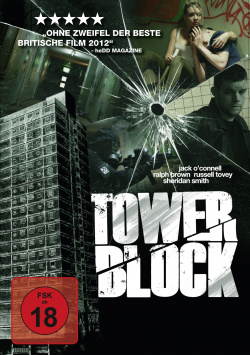 Film: Only a few tenants still live on the top floor of Tower Block 31, an unadorned skyscraper estate that will soon be razed to the ground for a new prestigious building. Here everyone lives for himself, there is no real neighbourly cohesion. And so it is not surprising that no one rushes to help when one night a young man is brutally murdered in the dark hallway. Without witnesses, the police's investigation quickly runs into nothing. But the deed does not go unpunished. For a few months after the murder, a sniper from the high-rise opposite opened fire on the tenants who, in panic, try to escape the deadly shots. But the killer has come up with some ideas to keep the residents of the skyscraper trapped in their floor and gradually blow the lights out of their lives...

"Tower Block" is a small, nasty thriller with a claustrophobic atmosphere that is reminiscent of John Carpenter's classics. Some of the characters are drawn very clichéd and the dramaturgy isn't really a big bouquet of surprises either. Nevertheless, the whole thing works really well. The tension arc rises very quickly and is maintained almost to the end. The undercooled dark setting of the unadorned concrete high-rise, the omnipresent but always invisible threat and the not always predictable twists make the feature film debut of the two directors James Nunn and Ronnie Thompson an extremely stirring siege thriller.

The very important topic of moral courage, which is too rarely shown for fear especially in problem areas of large cities dominated by anonymity, is put into the centre of history in a very exaggerated but effective way. By forcing the trapped tenants in this extreme situation to stick together and show exactly the courage and strength that would have saved the helpless young man's life, it becomes clear that in comparison it would have been relatively easy to prevent the murder. If they hadn't all been hiding behind their doors, if they hadn't simply looked the other way, but as a collective they would have confronted the perpetrators, then it would never have come this far.

However, the directors also make it very clear why people lack civil courage, why fear is so dominant and why it is so difficult to stand together in such a situation. Even though the film shows all of this in a very exaggerated way, it can at best inspire us to think intensively and reflect on our own actions. And even though the makers can be blamed for pushing this important message into the background too much because of the very bloody vigilante story, they still can't be denied that "Tower Block" works really well as a thriller and offers a high entertainment value.

Whoever appreciates dark and bloody tension cinema with a John Carpenter touch and can overlook some small dramaturgical hangovers and thin dialogues, will definitely be carried away by the events in the "Tower Block". Worth seeing!

Picture + sound: The technical implementation of the DVD is at a good level overall. Although the events take place primarily in dim light or in gloom, the overall sharpness and contrasts are quite convincing. The somewhat undercooled, very atmospheric colouring also leaves a positive impression. Only in the detail display there are some minor weak points from time to time and in very dark scenes slight image noise can also be detected. The sound that is present in a Dolby Digital 5.1 mix is dominated primarily by dialogues and smaller sound effects such as shots or fragmented discs. But every now and then, clearer effects ensure that the surround speakers are used convincingly. Good!

Extras: As a bonus the DVD has a short interview making of with statements recorded during the shooting. In addition there is the trailer and further program tips of the offerer. Somewhat lean.

Fazit: "Tower Block" is an exciting thriller, which reminds in its best moments of John Carpenter classics like "Assault - Anschlag bei Nacht". The whole thing works quite well as a malicious commentary on a lack of civil courage in an anonymous, egocentric society, even if some of the rather sluggish moments could have been exchanged for a bit more biting social criticism. All in all, however, a well done thriller that presents itself on DVD in decent picture and sound quality. Recommended