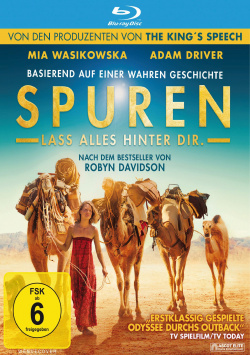 Film: Bored by life in the big city and in search of a deeper meaning in her existence, the young Robyn Davidson (Mia Wasikowska) moved to the Australian town of Alice Springs in 1975. From here she wants to fulfill a very special dream: alone with her dog Diggity and four camels she wants to cross the Australian desert to the Indian Ocean. 2,700 kilometres through scorching heat and dangerous terrain, and that as a woman - nobody here wants to take that very seriously. However, after many setbacks Robyn manages to start the journey, but has to make a big compromise: in order to secure the necessary financing, the National Geographic photographer Rick Smolan (Adam Driver) Robyn is allowed to join Robyn at regular intervals and photograph her. But although the young adventurer feels extremely disturbed by the unwanted companion right at the beginning, she soon has to realize that on this journey much bigger and dangerous obstacles will get in her way...

"Traces" is based on the book of the same name by Robyn Davidson, with which the Australian could inspire and inspire millions of readers. The director John Curran, who lives in New York, has transformed this very special borderline experience into a gripping screen drama that lives from two aspects in particular: on the one hand from the grandiose visual language, which has some very fascinating, in its beauty but also threatening moments to offer. On the other hand, it is the performance of leading actress Mia Wasikowska that leaves a lasting impression. The 24-year-old Australian, who has been one of Hollywood's most successful young actresses since "Alice in Wonderland" at the latest, perfectly embodies the idiosyncratic Robyn, who desperately tries to fill her inner void and rebels not only against a society dominated by men, but also against the harsh rules of nature. How she doggedly sticks to her goal, but in the face of physical exhaustion, total loneliness and life-threatening situations opens up to the world, her life and other people like the Aborigine Mr. Eddy (Rolly Mintuma), is thanks to Vasikovka's haunting game very moving, haunting and also comprehensibly implemented.

Although Robyn's journey through the desert has the most impressive visual moments to offer thanks to the camera work of Mandy Walker, the preparations and the associated setbacks are dramaturgically the most exciting part of the film. How Robyn tames wild camels, builds up a bond with the animals, works almost to the point of physical exhaustion, only to be thrown back to the very beginning again, is heartbreaking to watch. The fact that she does not break from it, but even gains strength, is well conveyed by the quite detailed treatment of this part of the story. When the actual journey begins, Robyn not only has the sympathies, but also the respect of the audience fully on her side and she no longer has the effect of an idealistic dream dancer, as perhaps she did at the beginning.

The fact that the audience feels the scorching heat, longs for water with Robyn or for recovery phases and is happy about every little experience of success speaks for the powerful staging. However, even the sad and terrible moments seem all the more intense as a result. "Traces" is by and large a beautiful movie, but it also has moments that are hard to bear. Although these are always announced well in advance, this doesn't change their effect much.

The movie isn't perfect, but there are too many small lengths, some clichéd side characters and some scenes that lack subtlety. But despite minor weaknesses, "Traces" has become a thrilling adventure that is also a truly gripping experience in home cinema. Absolutely worth seeing!

Picture + sound: The film lives not only from the strong play of Mia Wasikowska, but also from the fantastic pictures, which come on the Blu-ray thanks to a very high image sharpness and an atmospheric color mixture very well to the fore. There's also nothing wrong with the contrasts, which is why the visual realization of the film leaves a very positive overall impression for the home cinema. The same applies to the sound that is present in an atmospheric DTS-HD Master Audio Mix. The sound lives from the very well implemented soundscape of the Australian desert, which has some really powerful surround moments to offer in some scenes. Good!

Extras: As a bonus there are three short promo features in German language about the film (about 2:31 min.), about the true story of Robyn Davidson (about 3:22 min.), and about the journey to himself (about 2:52 min.). Interesting are the six interviews (approx. 29:59 min.), especially the one with the real Robyn Davidson. Finally there are a few uncommented B-Roll shots (approx. 6:00 min.), as well as an interactive map of the journey with some pictures and text insertions, which, however, can only be read on a large screen.

Fazit: "Spuren" (Tracks) is a thrilling adventure, which can inspire with wonderful pictures, a great leading actress and an exciting (true) story. On Blu-ray, the powerful drama is presented in very good picture and sound quality, with the bonus material the interview with the real Robyn Davidson is especially worth seeing. For lovers of the somewhat more sophisticated entertainment cinema there is one for it: absolutely recommended!