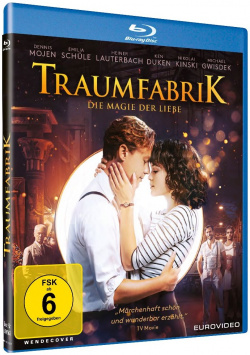 Film: In 1961, former NVA soldier Emil (Dennis Mojen) takes a job as an extra at DEFA Filmstudio Babelsberg. But right on his first day he causes so much chaos that he is fired by the general director (Heiner Lauterbach). But Emil not only lost his job but also his heart to Milou (Emilia Schüle), the dance double of the French star actress Beatrice Morée (Ellenie Salvo González). There's a lot of radio between the two of them. But there should be no reunion, because suddenly the land is divided and the construction of the Berlin Wall begins. Milou travels back to Paris while Emil is stuck in East Berlin. But then he has an idea: if he manages to lure Beatrice Morée back to Babelsberg, then Milou will come with him. But for this a very special film would first have to be shot, a film to which the star from France cannot say no…

Tales with the meanwhile almost typical "Titanic"-clamp - an old man reports on his great love - "Traumfabrik" does not exactly use fewer clichés. But this makes director Martin Schreier with so much charm and perceptible love for the cinema, that one forgave him all too gladly. On the contrary: because Schreier isn't afraid of being really cheesy at times, his film works really well as a tribute to the great love films of cinema history. Admittedly, sometimes it is a little too much of a good thing. Beatrice Morée, for example, is a very exaggerated cliché Frenchwoman, as you see all too often in German films.

On the other hand, Dennis Mojen and Emilia Schüle were a real dream couple. The chemistry between the two is just right and when they look at each other longingly, you can't wait until they (hopefully) get their happy ending. But "Traumfabrik" is not only a really beautiful romance with a high shame factor. The film also works very well as a love letter to the cinema. To take the Babelsberg film studio as the setting was inspired by the recently deceased film producer Tom Zickler, who also worked on the story. Zickler's stories about working in the legendary film studio fascinated the director so much that he absolutely wanted to make a film out of it. And a love story seemed to be exactly the right material for it.

Although the result at the box office unfortunately went down a bit, it doesn't say anything about the quality of the film. "Traumfabrik" has become exactly what the film wants to be: a film full of heart, great emotions, humour and drama. Really nice entertainment for a relaxed home cinema evening for two. Therefore, for all hopeless romantics, the following applies quite clearly: Absolutely worth seeing!

Picture + Sound: The powerful colours capture the atmosphere of the story very well and, in conjunction with the high overall sharpness, also bring out the detail-loving equipment very well. The sound is in a powerful DTS-HD Master Audio 7.1 mix, which transports not only the beautiful film music and dialogues but also some surround effects adequately from the speakers. Good!

Extras: The extras on Blu-ray primarily offer typical promotional material. But at least there are also 14 edited or extended scenes (about 27:40 min.), which have some really worth seeing moments to offer. In addition there are six interviews with the actors (about 16:57 min.), one interview with the director (about 5:08 min.), as well as a short conversation with the late producer Tom Zickler (about 3:38 min.). Two promo featurettes about Studio Babelsberg (approx. 2:13 min.) and about the stars in the film (approx. 1:52 min.) complete the additional offer next to the trailer and a clip from the premiere in Berlin.

Fazit: Hach, wie schön! "Traumfabrik" isn't just a love letter to the time of big cinema, but also a really charming romance, which should at least go to the hearts of the viewers, who aren't bothered by some cheesy clichés. Convincingly played by a very sympathetic pair of screens and staged with a lot of heart. On Blu-ray, the love story comes into the home cinema in good picture and sound quality and also brings some nice extras with it, especially the edited scenes are worth seeing. All in all, there is a very clear message for this disc: Recommendable!