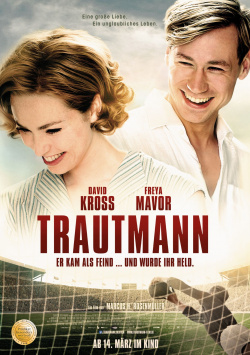 In the Second World War Bernd Trautmann (David Kross) fights for the German Wehrmacht. Shortly before the end of the war, he was taken into British captivity and taken to a camp near Manchester. During a football match between prisoners, he is noticed here by the grocer Jack Friar (John Henshaw), who is also coach of the St. Helens Provincial Club. He immediately recognizes Trautmann's unique talent as a goalkeeper. The club could use someone like him to escape the threat of descent. Against the resistance of the team, Friar hires the German, who is initially seen everywhere as an enemy. But with his talent and ambition Trautmann manages not only to win the hearts of the fans, but also those of Friars daughter Margaret (Freya Mavor). When Manchester hires him as their goalkeeper, however, he has to realize how deep the hatred of the Germans still sits with most Englishmen…

With "Trautmann" director Marcus H. Rosenmüller tells the true and impressive story of a real exceptional footballer. Especially through the legendary Cup Final of 1956, in which Bernd "Bert" Trautmann  played through to the end despite a broken neck and won the cup in Wembley in front of 100,000 spectators for England's traditional club Manchester City, he secured a place in the Sportolymp. Rosenmüller, who had the largest budget available in his career to date with 11 million euros, has not only staged an exciting biopic about a great athlete. Rather, his film is also a plea for forgiveness and international understanding.

David Kross plays the title role sovereignly and credibly. Also the other actors and the atmospheric locations in Northern Ireland make sure that the movie works well. However, it also has to be said that the staging sometimes seems a bit too sedate and despite the great pictures and the good actors doesn't get beyond the level of a TV movie. In such moments it is simply not possible to fully exploit the emotional potential of the story. Rosenmüller is able to capture decisive moments such as the game in Wembley in a gripping way. But as thrilling as these scenes are, other parts of the story just seem too pale and almost irrelevant.

However, this doesn't mean that "Trautmann" is a bad movie. That's far from the drama. The character that is at the centre of the story is so interesting that you even accept a few weak moments. And the work also has enough other positive aspects that lead to a very clear conclusion in the end: Worth seeing!