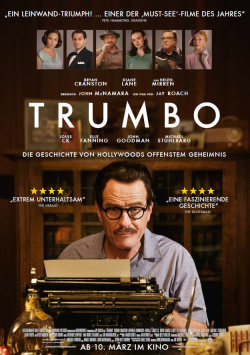 In the 1940s Dalton Trumbo (Bryan Cranston) was one of Hollywood's most successful screenwriters. Many of his works have become big blockbusters and he seems to be getting closer and closer to his goal of winning an Oscar. But then the mood changes in the dream factory when Senator McCarthy, with the help of columnist Hedda Hopper (Helen Mirren) and actors like Ronald Reagan and John Wayne, chases supposed communists. When Trumbo refuses to testify before McCarthy's Committee for Un-American Activities, he is blacklisted along with some of his colleagues and loses his lucrative studio contract. But Trumbo does not want the witch hunt to ban him from writing. Under a pseudonym he writes further scripts, among which some of his best works so far can be found. When one of these books was awarded the Oscar and the popular Kirk Douglas approached him to write the script for "Spartacus". the time seems ripe to step out of the shadow of anonymity and launch a counterattack…

"Trumbo" is based on the true story of the great screenwriter Dalton Trumbo and his fight against the McCarthy regime. Director Jay Roach, who used to be known primarily for hitting on comedies like the "Austin Powers" movies or "My Bride, Her Father and I", has staged this almost forgotten part of Hollywood's history with great actors and a good mix of drama and humor. He succeeded very well in tracing the general atmosphere that prevailed in Hollywood from 1947. Especially the actor Edward G. Robinson, played by Michael Stuhlbarg, makes it clear how much the pressure of the investigation commission drove people to betray their loyalty in order to protect their own skin.

At the same time there were also people like producer Frank King - wonderfully played by John Goodman - who wanted one thing in the first place: Earn money! They didn't care whether the screenwriter was a communist or not, as long as they delivered and brought money into the studio's coffers. The resulting discrepancy between the hunt and the ongoing machinery of the dream factory is the basis for this truly exciting story, which is extremely thrilling for film lovers in particular.

Bryan Cranston leads the great actor ensemble. The "Breaking Bad"-Star delivers a really haunting performance as a stubborn and somewhat self-absorbed scriptwriter, who also carries the movie beyond its more lengthy moments. But also the other actors make sure that the movie is a real treat from an acting point of view alone. The biggest surprise might be the comedian Louis CK ("Blue Jasmin"), who not only convinces with clever wordplay, but also in more dramatic moments.

In the second half the movie diminishes a little bit in dramaturgical terms, takes too conventional paths, which it treads too slowly. This doesn't make the whole thing even a little bit of a bad movie. But the initially high entertainment value is weakened a little by the fact that the staging is noticeable. And that's just a pity in view of the fascinating story and the great actors. All in all, however, Jay Roach manages to get a gripping look at a dark chapter of Hollywood's history, which is not only entertaining for movie lovers. And for that there is a clear one: Worth seeing!