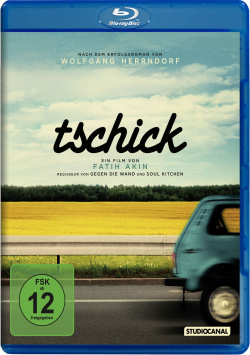 Film: Can life be even worse? Not only that his mother - once again - has to go to the rehab clinic for a few weeks and his father goes on a "business trip" with his young assistant. To make matters worse, 14-year-old Maik Klingenberg (Tristan Göbel) is also the only one in his class not to have been invited to the party of the most popular girl of the whole stage. Well, that's not exactly true. Also the new one in his class, the more than strange Tschick (Anand Batbileg), was not invited. But Maik doesn't necessarily want to be lumped together with him. And now, of all times, Tschick shows up at his place and invites him for a ride in a stolen Lada. Maik doesn't know why, but he lets himself be persuaded to go with him - and thus begins an adventurous journey for the two boys, which could be the best summer of their lives…

With "Tschick" director Fatih Akin once again proves his versatility. Whether comedy, heavy drama, explosive documentaries - Akin seems to reinvent himself with every film, even if there are certain stylistic elements that may be similar to some of his films. Now, for the first time, he has dared to adapt a bestseller and a coming-of-age story. Wolfgang Herrndorf's award-winning novel inspired more than 2 million readers. The pressure to live up to this success and the legacy of the author, who died in 2013, was naturally great. However, there is nothing to be noticed in the movie, as it radiates a pleasant lightness, which is very contagious for the viewer.

In how far Akin has captured the spirit of the original, I cannot judge at this point, as I have not read the novel - Ashes on My Head -. Regardless of that, I can say that the director has very well implemented the upheaval in the lives of his young protagonists. Visually, the movie has some wonderful moments to offer, which were enriched with a wonderfully unusual soundtrack (by Richard Clayderman, among others) and a lot of humor. Again and again, however, the film also allows time for quieter, thoughtful moments in which the dreams, longings and fears of the protagonists are revealed. The whole thing does not always happen subtly, but quite credibly.

That is also thanks to the two great young actors, whereby especially Trsitan Göbel ("Westen") once again reveals great talent. There are also some weaknesses. So the scenes with the street girl Isa (Mercedes Müller) seem a little tough and too constructed. In addition, it is difficult to identify a target group for the film. The film might be too dialogue-heavy for teenagers, for adult viewers who appreciate Akin's work some moments might seem too flat or simply not comprehensible. Of course, there is also an interface: a youthful, open-minded audience, also a bit more demanding, and such adults who want to remember their youth with films like "Stand by me", "The Outsiders" or "Tschick". It will be interesting to see how big this intersection will be in the end and whether it will be enough to make the film a similarly big success as the book was, at least in home cinema, after a rather weak performance at the box office. Fatih Akin and his team would have liked it, because despite some weaknesses "Tschick" is not only an amusing road movie, but also a very nice, entertaining movie about the end of childhood. And for that there is a more than deserved one: Worth seeing!

Picture + sound: The Blu-ray picture is absolutely convincing. The color scheme is powerful and captures the very special atmosphere of the movie very well. The image sharpness is on a good to very good level. Soiling, blurring or even picture disturbances are searched for here in vain. The sound is mixed in an atmospheric way and does not only provide for a proper use of the surround channels through the soundtrack and the well comprehensible dialogues. Good.

Extras: The Blu-ray has a lot of good extras to offer. We start with three interviews, which are pleasantly different from the usual promo clips. In the first Fatih Akin explains for Spiegel Online the creation of a scene (ca. 3:42 min.). In the second and best interview Akin is sent on a small road trip in a Lada and asked about the film (approx. 11:43 min.). Finally, the last clip is a contribution from the show Circus Halli Galli (ca. 3:57 min.) - of course no ordinary interview. We continue with three music videos and a small Making of to the music video "French Disco" (approx. 2:40 min.). This is followed by some Behind the Scenes clips: One day on the set (ca. 5:11 min.), an entertaining team movie (ca. 9:09 min.), as well as a comparison of storyboard and finished movie (ca. 3:29 min.).

The disc also has a standard promo-making of (approx. 11:16 min.), two short cut scenes with optional audio commentary (approx. 4:06 min.), amusing outtakes (approx. 6:15 min.) and a premiere clip (approx. 3 min.). And there is also an entertaining, humorous and informative audio commentary by Fatih Akin, Lars Hubrich (script) and Andrew Bird (editing). But the best extra is undoubtedly the recording of a reading of Wolfgang Herrndorf's novel from 2010 (ca. 57:29 min.). Absolutely worth seeing!

Fazit: Director Fatih Akin once again proves his versatility with "Tschick". "Tschick" is not only an amusing road movie, but also a very nice, entertaining movie about the end of childhood. A successful film adaptation of a novel that presents itself on the Blu-ray in good picture and sound quality. The bonus material is quite extensive, with particular emphasis on the recording of a reading of Wolfgang Herrndorf's novel. A good disc that a "recommendable" disc more than deserves!