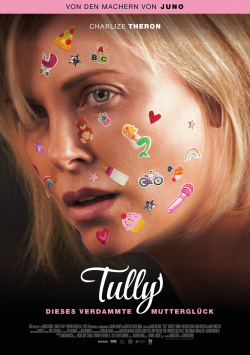 Marlo (Charlize Theron) loves her family, no question. But after the birth of her third child she is simply completely overwhelmed. The nerves are shattered and acute sleep deprivation does not make things any easier. Her husband Drew (Ron Livingston) tries to support her as best he can, but his job doesn't always allow it. Marlos brother (Mark Duplass) gives her a special present: A "Night Nanny" who takes over the helm at night and takes care of the children and the household. At first Marlo is sceptical about the idea of having a stranger live in her house at night and take care of her children. But when she meets the young, smart and dedicated Tully (Mackanzie Davis), she can't just let herself go. A very special friendship develops between the two women, which could change Marlo's life in the long run...

After "Juno" director Jason Reitman and screenwriter Diablo Cody got together again for "Tully". Cody was inspired by her own experiences as a mother of three - and by the thoughts which, despite all her love and happiness, go hand in hand with the resulting burdens such as acute sleep deprivation. However, there should not be too serious a story about a woman with postnatal depression. Rather, the unexpected friendship of two women and the resulting rediscovered joy in the self, but ultimately also in the family, should be told.

This story seems to follow all conventions. Everything seems to be quite predictable - until it comes to a turn that you don't see coming. Of course, this is not betrayed here. Only that much can be said: In the end, "Tully" isn't the movie you thought you saw. And it is precisely from this that he draws his strength. Staging, script and above all the acting performance of Charlize Theron are very good. But in the end also despite their quality somehow something arbitrary. The movie only leaves a real impression through its unexpected twist, which surely makes the viewer, who are parents themselves, think a lot.

"Tully" is a movie you should really give a chance to the end. Sure, some things seem constructed or clichéd. But in the end there is a justification for everything that might have been criticized at first - or at least for most of these points. Yes, despite its rather short running time, there are some lengths. And yes, this is not Jason Reitman's strongest film. But the bottom line is that it's a strong and quite relevant drama, interspersed with light comedy, that cleverly tricks the viewer. And for that there is clearly one: Worth seeing!