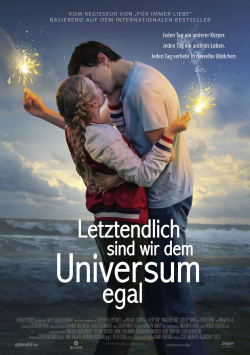 Ultimately we don't care about the universe

Rhiannon (Angouri Rice) doesn't just have to deal with the normal problems of a 16-year-old teenage girl. There are also some difficulties in her family that are a daily problem for her. It's just the right thing for her to kidnap her friend Justin 8(Justice Smith) for a wonderful day out of normality. She experiences moments of pure happiness - not suspecting that Justice is not himself on this day. Rather, a mysterious soul being called "A" lives in the boy for 24 hours. Day after day "A" awakes in a new body and takes over the life of this girl or boy for 24 hours. A" never reveals its true identity - until the soul gets to know Rhiannon. There is a very special bond between the two, which is why "A" reveals itself to her. At first Rhiannon doesn't believe a word, of course, but when she realizes that "A" really exists, it's the beginning of a very special love story that has to overcome new challenges every day. But can a happy ending be possible at all under these circumstances?

With "Ultimately we don't care about the universe" the youth book author David Levithan ("Nick & Norah - Soundtrack einer Nacht") has landed a real bestseller, which will even be continued in summer 2018 with "Someday". Director Michael Sucsy ("Forever Love") has adapted the original teen fantasy romance together with the excellent screenwriter and writer Jesse Andrews ("I and Earl and the Girl") for the big screen. Even if some aspects of the book have been changed or missed out - which is the rule with novel adaptations - this implementation has been really successful.

That is praiseworthy in so far as the most difficult hurdle was credibly overcome: In a relatively short time and with the limited cinematic means, the film had to convince the viewer that Rhiannon really loves "A" - even though every day a different person stands in front of her. Whether it's a boy or a girl, a smart athlete or an inconspicuous nerd, the feelings are always the same. Of course, this can be described much more intensively in the book and thus also more comprehensibly for the readers. In the movie the makers have to succeed in making "A" with all its different faces look like one person. And that's actually succeeded.

Although some aspects are a bit kitschy and there are clear weaknesses especially in dramaturgical terms - so the problems in Rihannon's parental home are dealt with really superficially - Sucsy manages, thanks to his well-chosen ensemble, atmospheric pictures and a fitting soundtrack, to build up the love that overcomes all boundaries and prejudices in a rousing and empathetic way. But there was one big problem for Sucsy and Andrews to solve: the end. Of course, that's not going to be revealed here. Only this much perhaps: At this dissolution the spirits will divorce. But on closer examination, the end that the two have chosen is the most consistent and, with such a fantastic story, the most logical solution. And that makes it absolutely satisfying.

"Ultimately we don't care about the universe" is a beautiful love story for a young cinema audience. Not free of clichés, kitsch and weaknesses, but also very original, in some moments even pleasantly courageous, funny and touching. And that's clearly one thing: Absolutely worth seeing!