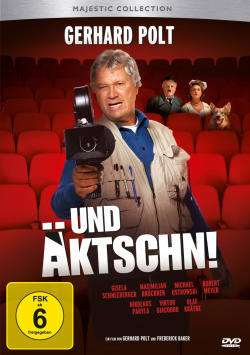 Film: The financial crisis did not stop at the Bavarian province either. Many of the citizens of Neufurth have seen better times, such as the passionate amateur filmmaker Hans A. Pospiech (Gerhard Polt). Abandoned by his wife and on the brink of financial ruin, Pospiech finances his passion only by selling World War memorabilia from his father's estate over the Internet. But then the tide seems to turn. In order to get his balance sheets back to where his boss wants them to be, the local Sparkasse director Faltermeier (Michael Ostrowski) comes up with the grandiose idea of bringing cultural sponsorship to Neufurth. A film competition is to take place, but the winner has already been secretly determined: the highly indebted Pospiech. However, he thinks less about his debt reduction than about finally being able to write film history. Together with his nephew Alfons (Maximilian Brückner), the innkeeper Grete (Gisela Schneeberger) and the music retailer Fleischbauer (Robert Meyer), the amateur filmmaker tackles an ambitious and controversial project: he wants to shoot a film about the private man Adolf Hitler...

"...And Äktschn!" finally brings the universal artist Gerhard Polt back to the screen after eleven years. Together with director Fredrick Baker he wrote the script for a comedy about "the power of mediocrity", as he himself calls it. A film about banks, Hitler and the love of cinema. A little social satire, a little poetic melancholy and a pinch of cabaret are some of the ingredients that make this film. He is just as unlikely to be put into a drawer as Gerhard Polt himself. But what worked really well during Polt's almost 40-year career leaves a somewhat bland aftertaste in the case of "...Und Äktschn!".

When you think of the grandiose Mai Ling sketch from "Da schau her" from 1979, you know with how much bite and political incorrectness Polt can put his finger into the wounds of our society. Here and there it comes through in his new film. But exactly in those moments, in which the script could have taken much more satirical bite, Polt suddenly becomes unusually tame and serves up some old-fashioned humor, in which also the timing seems a bit sluggish. In addition, there are some moments that end up in the void. Thus, in the course of the film, protest signs are faded in again and again that point to the problem of aircraft noise. But in the actual story, this topic no longer plays a role. It may be that this is intended to illustrate the general situation in the community, but as often as allusions are made to the aircraft noise protest, viewers simply expect this to play an even more central role.

The film about the private individual Hitler also has a lot of potential to offer. There are good approaches available that reveal intelligent cleverness and also a pleasing amount of bite. But in the end these scenes usually fizzle out in flaccid punch lines, which at best cause the viewer to smile tiredly. Only from time to time does humour hit the bull's eye and reveal what a subtle social satire "...And Äktschn!" could have become. Surely, in the moments when Hans A. Pospiech films himself and speaks directly to the audience, Gerhard Polt is in his element and often shows himself of the class you are used to from him. But all in all his cinema comeback seems too undecided and too reserved to live up to the expectations of his fans. Since "...And Äktschn!" is rather a tired provincial posse with some small highlights than a satirical fireworks display, it is enough in the end only to one: with some cutbacks for Polt lovers definitely still worth seeing!

Picture + Sound: There is actually hardly anything to complain about the technical implementation of the film. The image is very clean, the colors are powerfully mixed and the sharpness of the image also leaves a good impression in many scenes. No big surround fireworks should be expected for the sound. Nevertheless, the Dolby Digital 5.1 mix appears pleasantly lively in many scenes, whereby the dialogues are clearly in the foreground here. Good!

Extras: In addition to the teaser and trailer for the film, the DVD also has a very good Making of documentation (approx. 43:25 min.) to offer a pleasantly advertising-free and comprehensive view of the shooting. In addition there is also a very interesting interview with Gerhard Polt at Sternmann & Grissemann (ca. 13:40 min.). For Polt fans only the good bonus material makes this DVD absolutely recommendable!

Fazit: "...And Äktschn!" is a rather ambivalent matter. On the one hand, the return of Gerhard Polt to the cinema is a pleasure. Some wonderfully biting moments reveal the old qualities of the versatile artist. But in many other moments the comedy is simply too tame and conventional to fully realize its potential. For fans the purchase of the DVD is nevertheless worthwhile, especially since besides the well done scenes of the movie there is also a really worth seeing making of and an amusing interview to be seen. There may be some limitations with the movie, but for the DVD conversion there is a clear one: Recommendable!