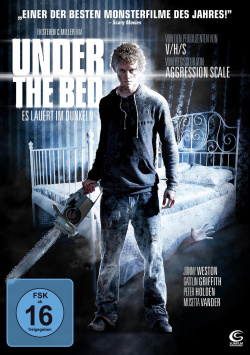 Under the Bed - DVD

Contents: Neal (Jonny Weston) lived with his aunt for over two years after his mother died in a fire allegedly caused by him. His father Terry (Peter Holden), who has meanwhile found a new wife at his side with Angela (Musetta Vander), sees the time has come for Neal to come back, even if only to be there for his little brother Paulie (Gattlin Griffith). It's hard for Neal to find his way into his old home as he is plagued by a secret that has plagued him since his mother's death. Because Neal is convinced that under his bed there is an uncanny power that seeks to kill him and his family. When Neal learns that Paulie also knows about this eerie monster, he realizes that only he can protect his little brother from it. But this fight is even more dangerous than he suspects in his worst nightmares...

"Under the Bed" plays with one of the primal fears of children, as the horror flick tells of the evil that lives in the children's room under the bed. This primal fear was already well served in the legendary Spielberg production "Poltergeist". And now also director Steven C. Miller ("Aggression Scale") wants to give the audience some goose bumps. Especially in the first half of the movie he manages to do that quite well, as his technically well done staging focuses on quite subtle and simple creepy effects, without really showing the actual horror.

Only towards the end the viewer gets to see what's actually hidden under the bed. And this is less fearsome than many a dialogue of the overall very flat script due to the not exactly large budget. Miller tries to make up for this shortcoming in the last third with some surprisingly solid splatter insoles. But even if this increases the entertainment value for genre fans, the story doesn't really gain in quality.

Although Miller tries to capture the charm of 80s horror movies like the already mentioned "Poltergeist", his story lacks too many interesting characters, a sophisticated dramaturgy or any spark of logic to really convince in the end. The movie has some good moments of tension, its realization doesn't seem cheap visually, especially at the beginning, and the finale has its bloody entertainment value. That's not enough to make you forget all your weaknesses. But it is enough to be able to attest a satisfied "Worth seeing" for viewers who don't attach much importance to logic, sophisticated dialogues and acting flights of fancy in this genre!

Picture + Sound: Technically, the implementation of the film is on a satisfactory level. The sharpness of the image is particularly convincing in the brighter scenes, even when smaller details are displayed. In the darker sequences there are some small weaknesses in this aspect that are accompanied here and there by a slight picture noise. The German sound is available in a Dolby Digital 5.1 mix as well as a dts track. In both cases the dialogues are rather centrally mixed, while especially in the last third of the movie the surround channels are used by some decent sound effects. Good!

Extras: As a bonus the DVD unfortunately only offers the trailer for the film and further program tips from the provider.

Result: "Under the Bed" is a real creepy thriller, which can comfort you with some good goose bumps and splatter effects over some dramaturgical weaknesses. The performances are on a good level for such a low budget production. Not a real masterpiece of contemporary supernatural horror, but a pretty entertaining monster movie that could offer genre fans an entertaining home theater evening. Recommended!