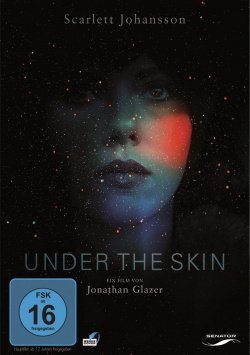 Under the Skin - DVD

Film: Laura (Scarlett Johansson) drives her van all over Scotland day after day, always looking for a new conquest. Many men also get involved in getting into Laura's car. And then it is no longer a problem for them to convince them with their charm and their attractiveness to accompany them to a common little shepherd's hour. What these men don't suspect, though: Laura is literally not of this world and she is not interested in sex, but in satisfying her hunger. But when Laura meets a man who sacrificially takes care of her and she experiences something like feelings for the first time, she suddenly has doubts about her murderous actions...

"Under the Skin" is the new film by Jonathan Glazer, who has already swum against the mainstream with his movies "Sexy Beast" and "Birth". But against his most recent work, his previous works were almost commercial mass-produced goods. Because "Under the Skin" defies all common viewing habits in almost every respect. A story in the classical sense is only marginally hinted at. There are hardly any dialogues that would explain the events clearly. This is the result of the sometimes very experimental pictures, which leave a lot to the individual interpretation of the audience. Numerous scenes were shot with a hidden camera, so that the interaction between Scarlett Johansson and numerous ignorant extras almost spread a documentary flair. This creates an extreme discrepancy with the otherwise very artificial visual language that Glazer otherwise uses.

Although there is already some kind of recognizable dramaturgy, "Under the Skin" is more video art than traditional feature film. The fact that most of the time Scarlett Johansson is watched as she drives around, talks to strangers and selects her potential victims offers an entertainment value that clearly tends towards zero. If you expect a straightforward story with a stirring plot, you'll be sure to find deadly boredom very quickly. But if you get involved in Glazer's cinematic experiment, you'll get something special here that hasn't been seen before in this form.

Since some of the pictures Glazer shows here are really fascinating from a purely artistic point of view. If one succeeds in freeing oneself from the expectations of the usual conventions of filmmaking, then the viewer is quickly captivated by the very special atmosphere that emanates from these images. What some would call boring becomes really stirring and gripping until the finale. Those who recognize this will also appreciate Scarlett Johansson's performance. The way the actress expresses the transformation of the alien she embodies here without many words is really more than convincing.

No question, "Under the Skin" is not an easy subject, not a film for a relaxed evening in front of the television, but a work that demands open-mindedness and full attention from the viewer. If you are willing to do so and have a general weakness for experimental video art, you should definitely get involved in this extremely unusual but intense viewing experience!

Picture + Sound: The film lives from its visual language. This has been well implemented on the DVD, whereby the sharpness of the image and the atmospheric colouring stand out positively. Smaller blurs prove to be a deliberately used stylistic device and soiling or other real weak points are not discernible. The Dolby Digital 5.1 mix remains completely unspectacular most of the time. The spherical music, a few dialogues and smaller, well implemented effects provide a minimal but effective sound carpet. Good!

Extras: As a bonus the DVD has a multi-part Making of (approx. 42:14 min.), which deals with a mixture of detailed interviews and photos from the shooting with topics such as the camera work, the casting, the editing, the music or the design of the poster. In addition, there are two miniature featurettes about main actress Scarlett Johansson (approx. 1:58 min.) and the shooting with hidden cameras (approx. 2:36 min.), as well as the trailer for the film.

Fazit: "Under the Skin" should be regarded more as an art project and less as a feature film in the conventional sense. Almost entirely carried by the experimental visual language and the deliberately distanced Scarlett Johansson, the story of an alien murdering a man eludes all common viewing habits in almost every respect. But those who can get involved with this very unusual work will quickly lose themselves in the fascinating images and experience a very special film pleasure. All the others will probably only feel boredom without limits. The DVD presents the movie in good picture and sound quality, the bonus material is worth seeing, but sometimes like the main movie itself also a bit bulky. But for lovers of artistic experimental cinema: Absolutely recommendable!