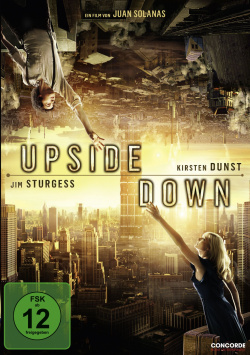 Film: Adam (Jim Sturgess) lives in a universe in which two worlds with opposite gravitational pull live directly opposite each other. While in the upper world there is prosperity that enables the inhabitants to live a carefree life, the people in the lower world live a dreary existence determined by poverty. An interaction between the two worlds is only allowed in strictly controlled exceptional cases and is otherwise punishable with severe penalties. When Adam invents a means by which the beauty industry of the upper world could be revolutionized, he gets permission to work at TransWorld, a corporation encompassing both worlds. Here he meets the young Eden (Kirsten Dunst) again, with whom he had already fallen in love as a boy. But years ago the two were separated from each other. Adam now wants to try everything to finally win his great love for himself. But not only that Eden comes from the upper world and they are separated from each other by gravity and political borders. Eden can't remember him because of an accident. But these are no reasons for Adam to give up. After all, Eden is his true love - and it knows no bounds...

The idea for his second feature film "Upside Down" came to the Argentine director Juan Solanas, who lives in France, in a dream. The picture of a man standing on the top of a mountain looking up at a woman also looking down at him from the top of a mountain just wouldn't let him go. And so around this dream image he devised a love story whose more classical structure is surrounded by an imaginative frame. Solanas had an impressive budget of 60 million dollars and a first-class creative team in front of and behind the camera for the film. The result is a picture rush that is clearly marked by its dreamlike origin in the truest sense of the word. Dramaturgically, however, the fantasy romance has some weaknesses.

In the beginning Solanas manages very well to draw the audience into the fascinating double world of "Upside Down". The director's ambitious vision can unfold very well thanks to Adam's mixture of wonderful pictures and explanatory vocal over commentary. Although the pictures sometimes look very artificial and don't seem as technically sophisticated as the comparable effects from "Inception", this fairy tale works flawlessly from a visual point of view. But after about half the running time it becomes clear that the care that Solanas put into building his story is not enough to carry it to the end. Too often he gets lost in his pictures, whereas the character- and story-development gets left behind a bit. Thus, some plot elements especially in the last third of the movie seem to be very superficial or hurried, which unfortunately leads to the fact that the emotional bond to the characters is clearly diminishing.

Statt of a big goose bump finale, for which this movie is almost predestined, a rather disappointing resolution is presented, that just doesn't live up to the expectations that were built up during the first hour. You get the feeling that Solanas ran out of ideas here and that he didn't know exactly how to tell his story in a coherent way. Thus "Upside Down" leaves a slightly ambivalent impression. The film is beautiful to watch, it is full of fantasy and obvious heart blood. On the other hand, the narrative finesse is missing towards the end, which would have been necessary to make the whole thing more than just some nice dream pictures. Therefore: only for viewers who like to get lost in imaginative dream worlds and who can overlook dramaturgical flaws, absolutely worth seeing!

Picture + Sound: A movie like "Upside Down" needs of course a good audiovisual realization to unfold its full power in home cinema. Fortunately, the technical implementation of the DVD also meets these requirements. The picture is very clean and has a good overall sharpness, where even smaller details come into their own. The artificial colouring is very well matched and the contrasts also leave a positive impression. The sound of the German soundtrack is available as a Dolby Digital 5.1 mix as well as a rich DTS sound. The voices are mixed in a way that is easy to understand, the partly somewhat reserved, but atmospheric sound effects and ambient noises result in an atmospheric sound carpet, into which the soundtrack blends in perfectly. But there's one more than deserved for that: Good!

Extras: The DVD has some good extras to offer. We start with a very interesting Making of (ca. 27 min.), which shows a typical promo-character again and again, but is altogether much more informative than usual advertising making ofs. In addition, the DVD contains two short scenes (approx. 1:44 min.), six promo interviews (approx. 21:16 min.) and 4 minutes of uncommented B-Roll recordings. Finally, the viewer can take a look at storyboards and previz recordings (approx. 14:41 min.), whereby the originally planned opening sequence is also shown, but could not be realized due to financial reasons. The trailer and further program tips round off the decent additional program.

Fazit: "Upside Down" is a visually enchanting romance, which has some small weaknesses to show dramaturgically, but takes the viewer so intoxicating into a dream world, that you can overlook the rather weak finale. In view of the rather low production costs of 50 million dollars, a really successful picture rush, in which one would only have wished the story a similar ingenuity as the visual style. Despite its content weaknesses, the film on the well-released DVD nevertheless deserves a clear "recommendable"!