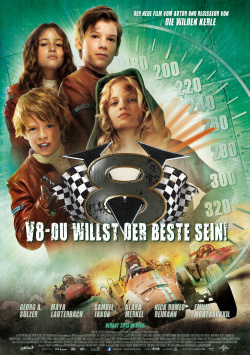 For David (Georg A. Sulzer) there is only one dream: he wants to become a racing driver. But a real racing driver also needs a real drivable vehicle and it costs money. Money that David would like to earn with various part-time jobs during the summer holidays. The fact that he also has to take care of his annoying sister Luca (Maya Lauterbach) doesn't make this undertaking any easier. But just when he no longer really believes that his dream will come true, he and Luca come into possession of a mysterious coin with the logo of the "castle" emblazoned on it. This legendary place is the destination that only the winner of a legendary and top secret racing circus can reach. Only selected children are allowed to participate, adults are strictly forbidden to enter the "castle". With the help of the wealthy and somewhat snooty Robin (Samuel Jakob) and the tough Kiki Lilou (Klara Merkel), both of whom also received a coin, the siblings want to face the first challenge on the way to the "castle": a race against the nasty Barakudas. But they seem to be superior in every way to the newcomers who called themselves "V8"…

Holy camshaft, what a cramp! I am aware that "V8 - You want to be the best" is not made for adult cinema lovers like me, but for children. And certainly some kids find the racing scenes just as cool as the rather flat gags or the outfits of the barracudas, which look ridiculous to the adult eye. Also the fact that, as with the "wild guys", adult authorities only play a very subordinate role and the children live their very own world according to their very own rules could trigger great enthusiasm among the young target audience. But does that make "V8 - You want to be the best" inevitably a good children's film? The answer is very clear: No!

The story itself is not very original, because like the kids' terrible sayings it offers only a gruesome recycling of all negative aspects from the "Wild Guys" movies. Whereas director and screenwriter Joachim Masannek had already revealed some very questionable views there, he continues this pedagogically not exactly valuable path in "V8 - Du willst der Beste sein". If he can be forgiven for his very simple drawing of good and evil, because even in respected fairy tales it is often not more differentiated, aspects like a latent sexism (which is not as bad as in "Die Wilden Kerle 4") are not worthy of a FSK 0 release.

There is nothing wrong with the child actors at this point. They do their job well throughout and radiate an obvious joy in racing and disguising, which will certainly infect some young spectators. But even if there is a certain talent recognizable in the children in front of the camera, it doesn't help much if this is missing in the script and direction. There are so many wonderful children's films that are not just desperately aimed at being cool. Films that manage to tell beautiful stories without offending intelligence. "V8 - You want to be the best" is definitely not one of these movies.

Who doesn't care what the kids watch, the main thing is that they have their fun, he can send his little ones confidently into this work. However, those who place a little value on the fact that the next generation is offered something of high quality and content in addition to fun should choose one of the numerous other and much better children's films that currently flicker across the screens. "You want to be the best"? Probably not!