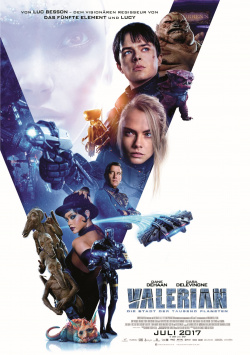 Valerian - The City of a Thousand Planets

We write the year 2740: Valerian (Dane DeHaan) and his partner Laureline (Cara Delevingne) work as special agents for the government, always striving to maintain order in the universe. This is not always easy with the countless worlds and peoples that live in the depths of our galaxy. This becomes more than clear when they receive the order to secure a particularly valuable cargo on the desert planet of Kirian. They then have to bring them to the huge Alpha space station, also known as the City of a Thousand Planets. Here already Commander Arun Filitt (Clive Owen) waits longingly for what the two agents could secure in a daring action on Kirian. But when Valerian and Laureline realize that they have become a pawn in a murderous conspiracy, they do everything they can to ensure that their cargo does not fall into the wrong hands. On a station with many different worlds and over seventeen million inhabitants this is not so easy…

With "Valerian - The City of a Thousand Planets" Luc Besson has fulfilled a childhood dream. Not only did he devour the comic adventures of "Valerian and Veronique" from the pen of Jean-Claude Mézières and Pierre Christin as a young boy. The legendary comic series also inspired him to make his film "The Fifth Element". And he is not the only director who has borrowed ideas from cult comics. After visiting the set of "Avatar", Besson realized that the time was ripe to bring the fantastic comic worlds adequately to the screen. And if there's one thing you have to give your brightly colored science fiction adventure credit for, it's the noticeable love of the original that is evident here at every moment.

After a really wonderful opening sequence, in which Besson - accompanied by David Bowie's "Space Oddity" - traces the time from the first international space station over the first encounter with extraterrestrial life to the time in which the story takes place, he lets the viewer dive into fascinating worlds, in which the possibilities of 3D technology are also well exploited again and again. Playful, colourful, imaginative - this is how this film presents itself. But what is its great strength is also a real weakness - in many ways. On the one hand, despite great effects, it is always clear that everything was created on the computer. The whole movie seems extremely artificial, which makes it hard to dive into these worlds. On the other hand, the visual realization is so important that the story of two of the comic books is almost completely pushed into the background.

And so it's not only the story that you don't care about, but also the characters - especially Valerian and Laureline. Granted, model Cara Delevigne plays a lot better here than in "Suicide Squad", but the spark between her and Dane DeHaan just doesn't want to jump over. Only Ethan Hawke, who obviously had fun with his small role, leaves a really positive impression here. But this can't be said about the otherwise so reliable Clive Owen, which might be because the music and facial expressions reveal after only one second that he is the real villain of the story. If Besson had written this on his forehead with a thick Edding, it couldn't have been more obvious.

There are some really nice ideas, amusing moments and impressive pictures. But in other moments one wonders again what Besson was riding. When three annoyingly cackling beaked creatures appear, you have to wonder whether Besson has learned anything from the debacle Jar Jar Binks of his esteemed colleague George Lucas, who is said to have been inspired by the comics of "Star Wars". The only annoying thing is the romantic banter between Valerian and Laureline, which you don't believe for a second.

As a colorful, silly and playful antithesis to dark science fiction fare like "Alien: Covenant", the upcoming "Blade Runner" sequel or even "Rogue One", "Valerian - The City of a Thousand Planets" may work very well. And there will certainly be genre fans who will see the film as a welcome change and love Besson's colourful playground. But if you generally have a problem with artificial worlds that are too obviously only CGI-works and if you want a story that doesn't only live from colorful pictures, you might get bored by this comic movie. This film will divide the spirits - and that is why there is only one: With reservations worth seeing!