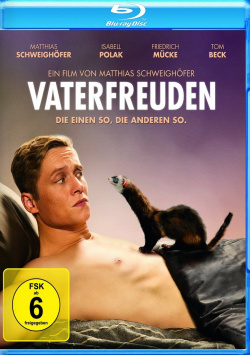 Film: On the surface, Felix (Matthias Schweighöfer) enjoys his life as a single. No responsibility, no obligation and sex whenever and with whomever he wants. Kids? Family? No, thank you! But it only becomes clear to him that Felix secretly desires exactly that when the ferret of his brother Henne (Friedrich Mücke) bites his way into his crown jewels and thus makes it impossible for him from now on to produce offspring. Fortunately, he has just earned a few euros as a sperm donor. Too stupid, though, that his inheritance, which has now become extremely precious to him, has already been forgiven. To apologize for his biting ferret, Henne steals the files without further ado and Felix quickly finds out who is pregnant with his offspring. The sports presenter Maren (Isabell Polak) proves to be the mother of his only child. A pretty, sympathetic and successful woman - what more could you want? But unfortunately Maren is already engaged to the snobbish Ralph (Tom Beck). But Felix doesn't want to let this small triviality deprive him of his only chance to have his own family. And so he does everything he can to get to know Maren and conquer her heart - of course the chaos is already pre-programmed...

After the success of "What a Man" and "Schlussmacher" Matthias Schweighöfer now does his third directing job with "Vaterfreuden". And it leaves a somewhat ambivalent impression. On the one hand it becomes very clear that Schweighöfer knows what his fans love and that he delivers exactly that to them with the usual good-humoured charm. On the other hand, however, it's a pity that he's just treading too much on the spot in terms of acting and no longer reveals the versatility with which he was able to convince again and again in the past. Whether a memorable "Tatort" appearance, his embodiment of the young Marcel Reich-Ranicki or roles in films such as "Kammerflimmern" and "Der Architekt", with all these works Matthias Schweighöfer has proven that he is capable of much more than just being the somewhat over-twisted, adorable child's head to which he has been subscribed in his past films.

There is no question that viewers who enjoyed movies like "Schlussmacher" or "Kokowääh 2" will also love "Vaterfreuden". But it can't be denied that all these films by Schweighöfer or Schweiger slowly reveal a certain interchangeability. Look, music and gags - all this has a high recognition value again in this comedy. In many moments, at least if you liked the very similar movies, that's not further disturbing. But there are also aspects in which a little more courage to do something new would have done the work good. Thus it is unfortunately in the long run somewhat tiring, if one sets again and again on the humorous effect of the word "fucking". And it's also not really understandable why Felix's desire for a family of his own is strengthened by the time he spent with his oh so funny cheeky niece, who reminds us of Magdalena from the "Kokowääh" movies.

However, we don't want to give the impression that "Vaterfreuden" is just an uninspired comedy that relies on cheap sex jokes, precocious children and the charm of the leading actor. The chemistry between the two "Friendship" co-stars Matthias Schweighöfer and Friedrich Mücke, for example, works very well, with Mücke in particular, as the avid brother, quickly gaining the sympathies of the audience. And even though the sounds Ferret Karsten makes sound as if Mogwai Gizmo from "Gremlins" has gotten lost in the movie, the furry supporting actor has a certain fun factor. And then there's Isabell Polak, who delivers a very convincing and lovable performance as a pregnant lady of the heart.

Whether on Facebook, at movie tours or special fan events, Matthias Schweighöfer really tries to be as close as possible to his target audience. That's how he gets to know what his fans love about him - and that he wants to give them exactly that again and again is something you really can't blame him for. Nonetheless, at the end of "Vaterfreuden" there remains the feeling that Schweighöfer sells himself under value in the long run and that he has a lot more to offer than just playing to similar characters in too exchangeable stories again and again. This is still quite amusing and entertaining. But slowly the first signs of fatigue become noticeable, which he should definitely counter with some variety in his next projects. Nevertheless, the bottom line is: for fans of Matthias Schweighöfer's first two directorial works, "Vaterfreuden" is also absolutely worth seeing!

Picture + Sound: The slightly alienated, very warm coloration of the film is also very effective on Blu-ray. Sometimes the picture appears a little bit blurred, but this is intentional and therefore not considered a weak point. All in all, the sharpness of the absolutely clean image is on a very good level, whereby even smaller details are usually shown to advantage. The sound is primarily determined by the dialogues and the sometimes too strongly mixed music in the foreground. But there are also always well used sound effects and ambient noises that make for a lively overall impression. Gut!

Extras: Matthias Schweighöfer has again put together a lot of extras for his fans, where of course he himself is the center of attention. Besides a good making of (ca. 22:43 min.) there are nine entries in the script diary (ca. 23 min.) as well as short contributions to the extras (ca. 3:48 min.), the ferret trainer (ca. 5:39 min.), musician Jonas David (ca. 2:53 min.) and about the poster shooting (ca. 1:45 min.). But not enough: Outtakes (approx. 2:40 min.), two music videos, as well as premiere clips from Berlin (approx. 2:28 min.) and Munich (approx. 4:01 min.), as well as impressions from the cinema tour (approx. 2:55 min.) are also still on the program. And as if that wasn't enough already, fans can take a look at the storyboard, the trailer and teaser of the film, as well as seven amusing "Matthias and Tom watch Vaterfreuden" videos. For fans a really full and worth seeing bonus package. Gut!

Fazit: "Vaterfreuden" is Matthias Schweighöfer's third successful directorial work, giving his fans exactly what they want to see. This isn't very original anymore and the humor is a bit flatter than in the two predecessors. But the audience, for whom the film was made, gets their money's worth again. The Blu-ray presents the film in good picture and sound quality and fans are also offered a full bonus package. Many good reasons not to leave this disc in the shop any longer. Recommended