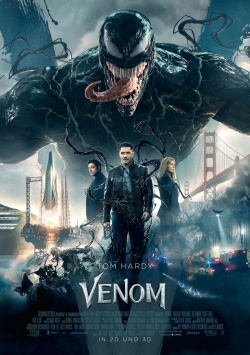 Actually, investigative journalist Eddie Brock (Tom Hardy) is supposed to conduct a commissioned interview with the young self-made billionaire Carlton Drake (Riz Ahmed), where unpleasant questions are taboo. But when he secretly sniffs into the files of his girlfriend Anne (Michelle Williams) and finds out about a tremendous scandal, he gets into trouble during the interview with Drake - with drastic consequences: Eddie loses his job, his good reputation and his relationship. But he should still get a chance to restore his good reputation: A close confidante of Drake tells Brock that her boss is conducting deadly experiments on homeless people. When Eddie sees it for himself, he is infected with an alien parasite that becomes part of his personality and gives him unexpected powers. Maybe Eddie as Venom is now powerful enough to stop Drake…

11 years ago, comic-strip antihero Venom appeared for the first time as Peter Parker's opponent in Sam Raimi's "Spider-Man 3", but failed mercilessly with the fans. But this was less due to the character than to Topher Grace, who played Eddie Brock at the time. Rather, it was the somewhat loveless way in which the comic figure, which was very popular in itself, was squeezed into an already overloaded story. Now "Zombieland" director Ruben Fleischer is trying to give "Venom" the cinematic success that this character deserves.

His work, however, was torn to pieces by many critics. Even if there are some aspects which are quite justified grounds for criticism, the very harsh evaluations are very exaggerated. All in all, "Venom" offers one thing above all else: really good entertainment. And a leading actor, who can convince both in the more serious moments, as well as with wonderful weird humor. It is not a masterpiece and by no means the best comic film adaptation that has come to cinemas this year. But the whole thing is always fun.

The two biggest points of criticism are the CGI effects, which are used too excessively in many scenes and can only convince to a limited extent. Sure, the whole thing's a comic book adaptation. But the many effects generated on the computer are too sterile and tiring in the long run. Here, less would definitely have been more. The situation is completely different when it comes to target-group orientation. The film was obviously adapted to a lower age rating. And this is noticeably detrimental to the overall impression. If the makers had had the courage to orientate themselves more towards the target group that brought the two "Deadpool" films a total of more than 1.4 billion dollars - not counting the home cinema evaluations - this would certainly have driven up the entertainment value considerably. Thus, in some scenes the whole thing seems like a tired compromise, which lacks that certain something.

There is a lot to criticize. A total failure is "Venom" but still not. Ruben Fleischer has staged entertaining popcorn cinema, that doesn't quite live up to its expectations, but still offers almost two hours of good entertainment. And that there could be a harder and longer version for home cinema, Fleischer at least indicated in interviews as a possibility - hope dies last! But for this tame "Venom" there is also a satisfied one: Worth seeing!   ]