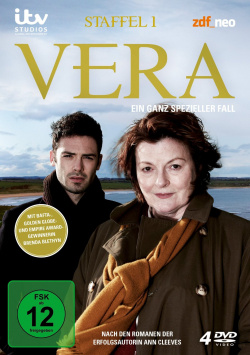 Content: DCI Vera Stanhope (Brenda Blethyn) from the Northumberland & City Police is not necessarily a sociable person. Sometimes she encounters her environment extremely rough, then again with biting sarcasm. She also pushes her colleague DS Joe Ashworth (David Leon) in front of her head again and again. But the young family man knows how to take his idiosyncratic colleague. In the course of time, a deep relationship of trust has developed between the two, which does not always facilitate their cooperation, but makes it extremely successful. Supported by her team, which also includes the young DC Holly Lawson (Wunmi Mosaku), Vera confronts the crime in her very special way - and thus not only ensures law and order, but also inspires the British TV viewers. More than seven million crime thriller fans in Great Britain will be present when "Vera - A very special case" is launched. Now the series based on the novels of Ann Cleeves is finally coming to Germany.

The first episode doesn't make it easy for the viewer to warm up with the series at least at the beginning. This is not only due to the fact that Vera Stanhope is a rather difficult and inaccessible character at first sight. The staging is also as bulky as the title character with a very exhausting nodding camera optic, dull colours and a matching musical background. But it's worth it to give this extremely successful investigator in her home country a chance and fight her way through the somewhat difficult beginning. Because "Vera - A very special case" turns out to be a very exciting, extremely atmospheric crime series, which can score with an outstanding leading actress and cleverly constructed stories.

Brenda Blethyn ("Pride and Prejudice", "Apology") lends the character more and more corners and edges, especially from the second episode onwards, and thus turns an initially simply quirky woman into a multi-layered, interesting and above all sympathetic character. David Leon as her young colleague is the perfect counterweight to the very dominant Vera. Also, the relationship between the two very unequal investigators becomes more and more profound and makes sure that the series doesn't only work well on the crime level, but also in an interpersonal sense. A pinch of dry humor loosens up the basically gloomy atmosphere again and again, which also increases the entertainment value.

Who appreciates British crime food of a more serious kind and wants to watch a really excellent investigator at work, shouldn't miss this first DVD box. And that's what the first season is about:

The focus of the new crime series based on the novels of the British author Ann Cleeves is the investigator DCI Vera Stanhope. Obsessed with her work, she solves crimes with sarcastic wit, courage and cunning. Vera's confidante and long-time colleague DS Joe Ashworth, played by David Leon, is her right hand. She trusts Joe blindly, and he supports her in her unconventional investigation methods. Together they solve difficult cases in four gripping thrillers with great enthusiasm and unparalleled professionalism. Vera, who kneels very hard into her cases, grew up with her father, who had little time for her. So she had to prove herself early on and developed her own sense of justice. Vera's team includes Julie Armstrong, Richard Short and pathologist Billy Catwright as well as DC Holly Lawson, the youngest member of the team. Holly often feels badly treated by Vera. But Vera only wants Holly to try harder, because she sees her as a real talent. In her first case, Vera and her team are dealing with a particularly macabre crime: When Julie Armstrong returns home in Newcastle after one of her rare nights out with her boyfriend Gary Wright, she finds her 15-year-old son murdered. Luke was strangled and placed in a bathtub filled with water and sprinkled with wild flowers, while his sister Laura slept quietly in the next room. Detective Chief Inspector Vera Stanhope and Sergeant Joe Ashworth quickly find out in the course of their investigation that there is a connection to another death. Some time ago, Thomas Sharp, Luke's best friend, drowned playing in the sea. It was an accident, as it turned out. Shortly afterwards, a second body, that of the beautiful young teacher Lily Marsh, is discovered in a tidal pool on the beach, on whose water flowers have also been sprinkled. Lily's body was discovered by a group of birdwatchers, including university lecturer Peter Calvert and his wife Felicity. DCI Vera Stanhope and her assistant Joe Ashworth suspect a connection between Lily Marsh and the birdwatchers. During her research, however, Vera makes a decisive discovery that leads the investigation in a different direction. (Text: ZDF)

DVD 2: Shadows of the Past

Jeanie Long claims to be wrongly convicted and imprisoned in a prison on the Northumberland coast. She is accused of murdering the daughter of her former partner, Abigail Mantel, called Abby. She had been found strangled in a field near where she lived. When Jeanie is to be taken to a hospital for a routine examination, she flees and visits her father Michael, who doesn't want to know anything more about her. Devastated, Jeanie runs in front of a bus with suicidal intent. By chance, DCI Vera Stanhope gets caught in the investigation at the scene of the accident. She asks herself whether it was really just a suicide or not. When Jeanie Long's suicide hits the headlines, new evidence emerges to exonerate her of the murder of 15-year-old Abigail. In the 11 years of her imprisonment, Jeanie always claimed her innocence, especially to her probation officer Robert Winter. When an exonerating witness for Jeanie appears and is murdered shortly afterwards, the case takes a surprising turn. In her inimitable style, DCI Vera Stanhope and her team explore secrets and uncover lies of a small community until the terrible truth finally comes to light. (Text: ZDF)

The discovery of the murder of Bella Furness by environmentalist Anne Preece at Baikie's Cottage leads DCI Vera Stanhope into the pristine Black Law landscape. Moreover, she is confronted with an unsolved case from her past, which still does not leave her alone. While dealing with local politics and the controversial plan of the entrepreneur Godfrey Waugh to build a quarry in the nature reserve, DCI Vera Stanhope finds out something decisive: Bella Furness and her husband Dougie, who is tied to her bed, had the right of way to the building site which is needed for the construction of the planned quarry. Bella had another ally in her fierce resistance to the quarry: Edmund Fulwell, a fanatical environmentalist and former landowner who is now forced to live in a remote forest hut. During the investigation, Vera and her team find out that Grace Bishop, Edmund's daughter, is employed by Godfrey Waugh. The latter in turn has a relationship with the environmentalist Anne Preece. Anne recalls seeing a woman shortly before Bella's death whose description matches Bev MacDonald. DCI Vera Stanhope now has to face her past and the mysterious disappearance of Bev's son Lee. Vera encounters the term "holy ground" more and more frequently. Then a second murder happens, which seems to throw Vera's previous theories overboard. (Text: ZDF)

Margaret Wilde is on her way to the airport with her 11-year-old son Adam when she is suddenly driven off the road by another car. The driver kills them. Adam can escape the brutal attack, but plunges into an icy river. DCI Vera Stanhope, who accidentally drives past the scene of the crime, can pull the boy out of the water and reanimate him. Contrary to all predictions Adam survives and becomes an important witness for the murder of his mother. In the course of their investigation, DCI Vera Stanhope finds that Margaret and her son had no permanent residence and have been on the run for many years. Margaret's neighbour Singh has taken care of them, but can't help Vera. It turns out that Margaret's plane tickets were paid for with the credit card of a certain Bobby Salter. Salter's being tracked down. Apparently, the father of the family had an affair with Margaret. He has no alibi for the night of the murder. In a psychological test, Adam hints at his past. It speaks of peacocks and the "shining man". The research also leads to Patricia Carmichael, an "honourable" judge who Margaret apparently knew. What role does the judge play in Margaret's assassination? (Text: ZDF)

Picture + Sound: The picture reproduces the drab, rather gloomy atmosphere of the detective stories through a harmonious, somewhat reduced and undercooled color scheme. The sharpness of the picture is at a good TV level, especially in the brighter scenes, whereas in the darker scenes there are some minor blurriness and minimal picture noise noticeable here and there. The stereo sound makes the dialogues sound clear and easy to understand from the home cinema speakers and the rather reserved soundtrack also creates a very harmonious atmosphere. Good!

Result: "Vera - A very special case" seems to be as brittle at first as the title character of the series. But soon the viewer is drawn into the exciting cases and convinced by the strong play of Brenda Blethyn and her co-stars of the high entertainment value of the series. Even if the last of the four episodes of this first season is a bit weaker than the other parts, at the end the very positive overall impression prevails, which makes this first DVD box absolutely recommendable for lovers of British crime food despite the lack of extras!