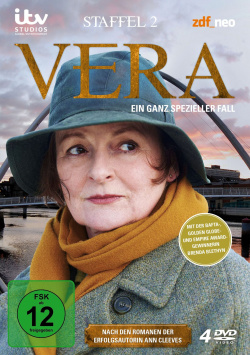 Contents: Warm, open-minded, a real team player - these are not exactly attributes that apply to DCI Vera Stanhope (Brenda Blethyn) of the Northumberland & City Police. Not all of her colleagues can cope with her cynical and rough nature. The actually very toughe DC Holly Lawson (Wunmi Mosaku) therefore throws in the towel at the beginning of the second season and can be moved. The eternal teasing was just too much. Her colleague DS Joe Ashworth (David Leon), on the other hand, knows how to deal with his boss. With a lot of patience he succeeds again and again in penetrating to the soft core under the damn rough shell. So he can learn better from her, which makes him a better policeman in the end.

Together the two are confronted with the rest of their team also in season 2 again with quite different cases. Thus the daughter of Stuart Macken, Vera's first sergeant, becomes the victim of an arson attack. Shortly afterwards Macken takes his own life. For Vera, this is a very personal case that takes some unexpected turns. This also applies to the other three cases in the squadron, in which the police officers have to investigate on a military basis or have to deal with a dead social worker. And completely besides Vera experiences also still another secret from their own past, which could turn their life gehörig on the head.

With over seven million spectators is Vera - a completely special case in Great Britain now for four seasons a full success. In Germany, too, the fan base of the series based on Ann Cleeves' novels is growing steadily. This enormous popularity is certainly not due to the individual stories, which are at their core very conventional and really do not revolutionize the crime genre. Rather, it is the wonderfully eccentric main character that makes this series so special. Vera Stanhope is a very complex character, which Brenda Blethyn brings to life in a wonderful way with many fine nuances. She manages perfectly to fill the quirky investigator with a lot of heart, despite her sometimes very grumpy nature, so that you just have to like her as a viewer. David Leon is a very good counterweight to this. As a young family man with some private worries and great professional ambitions, Vera is more to him than just an experienced boss, but also a kind of mother figure. Between the two there is a very special dynamic, from which the series can profit again and again.

The four episodes of the second season are all good crime thriller entertainment, whereby the first two cases are qualitatively a little superior to the last two episodes. Just the fourth episode has some distinct lengths. But that is whining on a high level, because altogether also season 2 offers again crime thriller entertainment of the finest one. Atmospheric locations, great actors and exciting stories make "Vera - A very special case" a must for all fans of British crime food of the particularly entertaining kind. And that's what the four episodes of the second season are about:

The policeman Stuart Macken is on his way home to his daughter Stella. When he gets there, the house is on fire. Macken manages to recover his seriously injured daughter. She goes into a coma at the hospital. The cause of the fire was an incendiary device thrown through a window by an unknown person. DCI Vera Stanhope starts the investigation. Stuart Macken is a colleague she knows from the beginning of her police career. (Text: ZDF)

The social worker Jenny Lister is found murdered on the bank of a river. DCI Vera Stanhope has the task to inform Jenny's daughter Hannah about the death of her mother. The investigation reveals that Jenny Lister recently had several personal belongings stolen, including her laptop. Hannah's boyfriend tells Vera that his mother does not accept his girlfriend Hannah. (Text: ZDF)

Sergeant James Deverson celebrates his departure from military service. The next morning, he's found dead. DCI Vera Stanhope and her assistant Joe Ashworth are investigating the barracks. It's obvious the lieutenant in charge wants to check the incident off as suicide. Forensics, however, quickly have doubts about this theory. (Text: ZDF)

On a motorway service area the body of a junky is found in a garbage container. He fell seriously injured from a bridge onto a truck and was dragged along. Since the body originates from the jurisdiction of DCI Vera Stanhope, she demands a transfer of the corpse and takes over the case. Clothes and stolen papers lead Vera and her team to the hobby beekeeper Guthrie. (Text: ZDF)

Picture + Sound: In the second season it is also noticeable positively that the visual implementation well reproduces the drab, rather gloomy atmosphere of the detective stories through a harmonious, somewhat reduced and undercooled color scheme. The sharpness of the picture is at a good TV level, especially in the brighter scenes, whereas in the darker scenes there are some minor blurriness and minimal picture noise noticeable here and there. The stereo sound makes the dialogues sound clear and easy to understand from the home cinema speakers and the rather reserved soundtrack also creates a very harmonious atmosphere. Good!

Extras: There is no bonus material except for some program tips.

Conclusion: "Vera - A very special case" offers thanks to atmospheric locations, exciting stories and an outstanding leading actress again crime entertainment of the particularly worth seeing kind. Although there are some smaller lengths here and there (especially in episode 4), the box is a must for those who already liked season 1. Technically, the four new cases have been implemented in a very atmospheric manner. The missing bonus material may be lost due to the quality of the series. The bottom line is that it's a rebirth: absolutely recommendable!