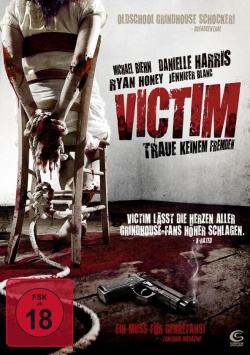 Film: Kyle Limato (Michael Biehn) retired from society a few years ago and now lives in a hut in the Californian forests. One night his peace is disturbed by the young Annie (Jennifer Blanc). The desperate woman asks him for help as she is chased by two men who have already killed her friend Mary (Danielle Harris). The explosive thing is that the men are the influential policeman James Harrison (Ryan Honey) and his buddy Jonathan Cooger (Denny Kirkwood). No help can therefore be expected from the cops. First of all, Kyle is still reluctant to get involved. But soon he succumbs to the charm of the attractive Annie - with bloody consequences...

Michael Biehn has staged "Victim" with a mini budget of 800,000 dollars in only eleven days near Malibu. He was supported primarily by family and friends, especially his wife Jennifer Blanc, whom he has thanked (and surely also out of a certain pride) especially in the common sex scene very handsome in the picture. What the actor known from movies like "Terminator" or "Aliens" did in the short time with relatively little money as director, scriptwriter and main actor has its moments. With elements of the grindouse movie and the exploitation horror Biehn has staged a thriller that is exciting and fun in its best moments.

The problem is that the dialogues are partly really underground and the many flashbacks in which you get shown how Annie and Mary prepared for the meeting with James and Jonathan and what happened during the rendezvous slow down the actual story over and over again. For its anyway quite short running time there is just too much unnecessary talk instead of real suspense, which is especially annoying for those viewers who expected a real horror thriller. In addition, there are always a few large logic holes that Biehn finds difficult to close again. For example, one wonders why Kyle, who allegedly has completely withdrawn from society, is shown in the first scene during the very relaxed-looking visit to a café. This can be explained in a certain way in the end (why, of course, should not be revealed here), but this debut for this character is certainly not really well chosen.

Despite its very obvious weaknesses, "Victim" as a low budget thriller is definitely worth seeing. The neat play of Biehn and co-star Ryan Honey, some well done moments of tension as well as a subliminal irony, that comes to the fore especially in the last seconds, make this B-movie worth seeing at the end - as long as the viewer doesn't expect more from the movie than what it has to offer.

Picture + sound: A very artificial blue tone is noticeable in the dark scenes, which underlines the overall somewhat cheap look of the film. Otherwise, however, a good image sharpness and a harmonious colour scheme in the bright scenes leave a clean, undisturbed overall impression. The sound mix is rather unspectacular. The directionally mixed dialogues dominate the action, ambient noises and other sound effects get lost a bit. But since a dialog-heavy thriller can't be expected to have a surround firework anyway, that's enough for a satisfied one: Good!

Extras: Besides the trailer and further program tips of the provider, the DVD has a quite worth seeing Making of (approx. 24 min.).), but unfortunately no optional subtitles are available for it.

Fazit: "Victim" is a mixture of Grindhouse Thriller and Exploitation Horror, which has some good beginnings, but also some obvious weaknesses like conspicuous logic holes. For a small low budget production that's fine, but for a really gripping thriller it's not quite enough. Nevertheless: some very intense moments, the decent actors and the good, even though not quite surprising ending make the movie worth seeing for genre fans!