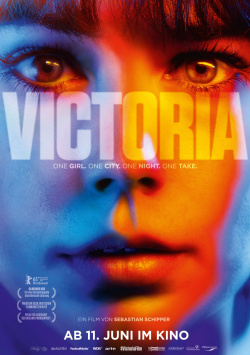 Another wild night in Berlin is coming to an end, but this is just the beginning of the adventure for the young Spanish Victoria (Laia Costa). When she meets Sonne (Frederick Lau) and his buddies Boxer (Franz Rogowski), Blinker (Burak Yigit) and Fuß (Max Mauff) in front of a club, she thinks she will only hang out with likeable Berlin boys for a moment. Not a bad view, especially as the spark between her and the sun immediately jumps over. But after a few exuberant moments and a tingling flirt, the situation suddenly changes. Because the sun and his friends still have a debt to settle. And to do that, they're supposed to be doing a foolproof but highly illegal thing. And since his foot got unrestrained drunk, Sun Victoria asks to step in as a driver. It is supposed to be only a small, harmless courtesy that will change the young woman's life forever...

Sebastian Schipper has staged an extremely interesting, challenging drama with "Victoria". It is certainly not the first film that has been shot completely in one take - or pretends to have been shot in one take. Because when it wasn't shot digitally, but on film, it was impossible. 90 minutes or more at a time without changing the film roll several times. And so there then simply had to be tricked a little with perfectly prepared cuts. But even though it was only the switch to digital cameras that made it possible to stage a film lasting over two hours in one take, this stylistic device is not really new.

This makes the performance of Schipper and his team, especially that of the actor and cameraman Sturla Brandth Grøvlen, no less impressive. Since the film was not shot on a limited set, but at different locations in Berlin, logistical best efforts had to be made here, whereby it was also necessary to keep uninformed passers-by from disturbing the shooting and to get all 150 extras and 22 locations under control. Between 4:30 and 7 in the morning. Not an easy undertaking - but the effort was worth it. Because this unusual and for the viewer also challenging style makes the trip, which the title character lives through in "Victoria", extremely tangible and intense.

To feel this way, you have to fight your way through the first hour. At first glance it seems a bit trivial and reminiscent of a somewhat prolific version of "Before Sunset". They're digging in broken English, consuming alcohol and roaring through Berlin. That may seem a little trivial and exhausting. But when the events come to a head and Victoria is involved in a bank robbery and its dramatic aftermath, the slow build-up fully pays off. The film shows very vividly how quickly a person's life can change. The cheerful young woman will never be the same again after only two hours. Surely it remains to be seen whether one really needs to know everything one learns about them and the sun in the first hour. There is no question, however, that the ambitious staging and the extensive presentation of the figures in a rather carefree context ultimately lead to the intense effect that "Victoria" undoubtedly has. Whoever appreciates intensive arthouse cinema from Germany and can get involved in the challenging staging, will be offered a very special trip with this drama, which you won't soon forget again. Worth seeing