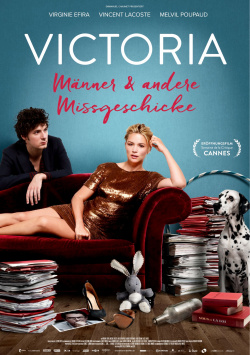 Lawyer Victoria (Virginie Efira) seems to have her life under control. The single mother is successful in her job and also indulges in a relaxed sex life without any obligation. And I'd like to keep it that way, please. Too bad she meets two men at a wedding who are going to mess up her life. She is persuaded by her good friend Vincent (Melvil Poupaud), who is accused after the celebration of the attempted murder of his girlfriend, to represent him in the case. And also the former small dealer Sam (Vincent Lacoste), who would like to become a lawyer himself, she lets into her life as a "girl for everything". When she loses her mandate through carelessness and is not allowed to practice for several months, Victoria threatens to be thrown off track…

Virginie Efira ("Pear Cake with Lavender") is one of the most popular faces in French film right now. No wonder, because Efira is attractive, yet not an unapproachable beauty, she is likeable and a really good actress. She manages again and again to make even mediocre roles worth seeing. A good example of this is the comedy "Victoria - Men & Other Misadventures". The Belgian-born director acts very confidently in a story that offers some really good and funny moments, but also just as many weak and very tough scenes.

Director Justine Triet simply juggles with too many ideas that are good at their core, but just don't want to fit together convincingly. While some of these ideas are almost overused, others seem somewhat immature. You can always feel that the potential is there, but somehow the timing lacks the spark that makes the whole thing work well. No question about it, the movie is still quite entertaining for long stretches. This is ensured by some very nice moments, for example during the turbulent trial, during which even animal witnesses are summoned. Even the supporting actors have enough charisma to cover up some of the weaknesses.

Nevertheless, all this is not enough to give the comedy the necessary momentum it would have needed to be completely convincing. So "Victoria - Men & Other Misadventures" is quite nice, but really not anymore. And there's only one in the end for that: Worth seeing with some concessions!