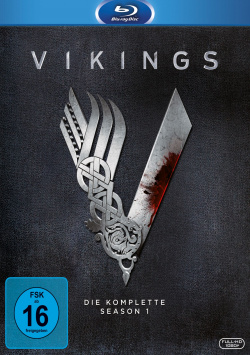 Film: Scandinavia, 793 ADThe Viking Ragnar Lothbruck (Travis Fimmel) lives with his wife Lagertha (Katheryn Winnick) and their children Bjorn (Nathan O`Toole) and Gyda (Ruby O`Leary) in the tribe of Jarl Haraldson (Gabriel Byrne). Year after year Ragnar moves with his men to conquer the East. But Ragnar's had enough of moving east. He would much rather sail west to find out what cities and gods there are. But the tribal leader does not want to hear about this proposal. Rather, he threatens Ragnar that it will have bitter consequences for him if he once again questions his authority. But Ragnar is not intimidated by it. He can win a small group of loyal allies to join him and use a new navigation technique to head north. When this first ride becomes a successful haul, Ragnar's reputation in his tribe grows enormously - much to the displeasure of Jarl...

"Vikings" is the first self-produced television series of the History Channel. Michael Hirst, who already worked as executive producer and author on the series "The Borgias" and "The Tudors", knows how to mix historical elements with entertaining fiction. The series is based on the story of the legendary Viking Ragnar Lodbrok, who is said to have lived and worked in the early 9th century. Even though the series takes a lot of liberties and therefore wouldn't necessarily be suitable for history lessons, the makers have obviously tried to achieve a certain degree of authenticity, especially with regard to equipment and weapons. It is therefore easy for the viewer to immerse himself in the world of the Vikings.

This actually creates the impression that one is learning something about the myths, rituals and battle tactics of the Vikings. However, the focus here is not on the learning factor, but on the entertainment value. And that is, after a somewhat tough beginning, but very high. It takes a little while for the story to get going in the truest sense of the word. But it's worth it to be patient with the first two episodes, because soon after you are caught by these "Vikings" and can no longer free yourself. But it's not necessarily the battle scenes that are so gripping and entertaining. The dramaturgy as a whole is very well structured and has several captivating action arcs. The conflict between Ragnar and Jarl Haraldson, who is becoming more and more respected in his tribe, the unusual friendship between the Viking and the monk Athelstan (George Blagden) or the growing fraternal quarrel between Ragnar and Rollo (Clive Standen) make sure that the nine episodes of the first season never get boring.

Hard guys, brutal fights, political and cultural conflicts, romantic confusions that reach a temporary climax at the end with the appearance of the beautiful Aslaug (Alyssa Sutherland) as well as intrigues and power games within the clan are on the program in this successful first season. Although the series doesn't quite play in the same league as "Game of Thrones", it can easily maintain the level of Michael Hirst's earlier series. If you like historical series material and don't mind when fiction sometimes triumphs over facts, you shouldn't miss "Vikings". Absolutely worth seeing!

image + sound: The Blu-ray image is absolutely clean and pleases with a very high image sharpness, which even in the dark scenes shows hardly visible quality losses. The colouring is dominated by very earthy tones, and overall looks very harmonious and atmospheric. The black values are well balanced, which also has a positive effect on the contrasts. All in all, there's really nothing to complain about here. The same applies to the sound, which leaves a very lively and powerful impression especially in the English DTS-HD MA 5.1 track. The German DTS 5.1 mix is a little bit weaker, but also offers an absolutely successful surround feeling, especially in the more action-packed moments. Gut!

Extras: The first disc features an audio commentary on the pilot by series creator Michael Hirst and actress Jessalyn Gilsig as well as some edited scenes (approx. 3:01 min.). The other extras are on the third disc. Here's another audio commentary on the last episode of the season and a missing scene (approx. 0:38 min.). Here are three interactive features about the Vikings' journeys and about the Vikings' weapons. Here, individual locations or objects can be selected and the viewer is then provided with historical information on the basis of short video contributions. Three short documentations about culture and laws of the Vikings (ca. 20:48 min.), the origin of the series (ca. 17:09 min.), as well as warfare and tactics in the series (ca. 12:11 min.) complete the informative additional material. Worth seeing!

Fazit: "Vikings" is a lavishly staged history series, which can build up a very high level of tension and entertainment after a somewhat tenacious beginning at the latest from episode 3. Even though history takes some historical liberties and is therefore only suitable as an entertaining history lesson to a limited extent, the History Channel has hit the bull's eye with its first fictional series. Packingly staged battle scenes, elaborate equipment and good actors make "Vikings" a real enrichment for the TV landscape, which presents itself on the Blu-ray in very good picture and sound quality and also has some good extras to offer. And for that there is a very clear one: Absolutely recommendable!