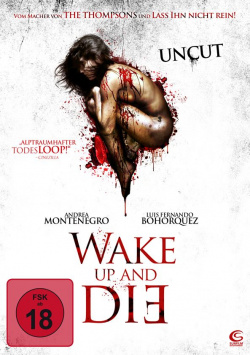 Wake up and die - DVD

Content: When Camila (Andrea Montenegro) wakes up after a one-night stand next to Dario (Luis Fernando Bohórquez), the young woman is initially a little confused and embarrassed. Because actually such sexual adventures are not their kind at all. But when Dario also awakes, she immediately feels attracted to him again. Between them it is very harmonious and passionate and they sleep together again. Suddenly everything around Camila becomes blurred and she wakes up again next to Dario, begs him in panic not to kill her. But Dario breaks her neck cold as ice. Moments later Camila wakes up again and slowly she realizes that she is in a deadly time loop from which she can only escape if she can prevent Dario's murderous lust...

"Wake up and die". reminds at the beginning strongly of the Chilean drama "In bed - En la cama", in which it was also about the fact that a young couple after a passionate one-night stand talked about life and love almost all the time without any clothes at all. Miguel Urrutia's unusual thriller begins very similarly. The situation between Camila and Dario, in which a certain feeling of happiness mixes with shame and a little embarrassment, is captured very authentically and the conversation that develops between the two suggests a similar plot to "En la cama". But what begins so harmoniously and passionately erotic changes from one second to the next when the whole thing changes into a surreal horror version of "Und täglich grüßt das Murmeltier".

Always Camila wakes up at the same starting point, but knows what will blossom in the next minutes. The whole thing is also filled with mysterious visions and gruesome twists that always lead back to the same point. From here on, the movie is an intense horror chamber play, which may have some rather bloody scenes, but can primarily captivate on a psychological level. Carried by only two actors, who also have to act naked most of the time, the movie could have been boring or lurid and voyeuristic.

However, here Urrutia finds just the right tone that makes "Wake up and die" a very intense thriller until the finale. Although the Colombian filmmaker makes use of some motifs in the last third, which are obviously borrowed from films such as "Psycho" or the original of "Friday the 13th", the film is still in its infancy. Especially one scene seems to be taken directly from the slasher classic. Nonetheless, the thriller has a distinct independence and a pleasant originality, which remains the same until the last shot. If you need a lot of pacing and slaughter for a well done horror movie, "Wake up and die" might not be the right movie for you. But if you value psychological horror and like small intense chamber plays, you can't avoid this movie. Absolutely worth seeing!

Picture + sound: The technical realization of the film is very atmospheric. The picture is clean, the sharpness is on a good level. Here and there a slight noise is noticeable, but this has only a slight negative impact. The colour scheme seems a little undercooled, which fits well to the mood of the thriller. The sound in the Dolby Digital 5.1 mix, as well as in the dts track, is rather restrained overall, as the conversations between Camila and Dario and smaller sound effects determine the minimalist behaviour in the first place. Good!

Extras: Until the trailer and other program tips from the provider, the DVD unfortunately has no additional bonus material to offer.