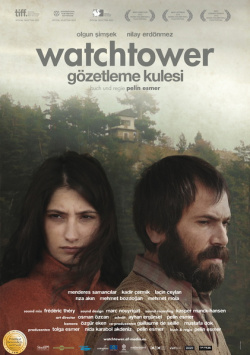 The small village Tosya lies in a remote mountain region of Anatolia. Nobody actually gets here of their own free will. And yet Nihat (Olgun Simsek) and Seher (Nilay Erdonmez) have independently chosen this deserted place to escape their previous lives. While Seher works as a travel companion for a bus company and is allowed to live in Tosya's small bus station, Nihat has accepted a job as a firefighter. He is to look out for forest fires from the high watchtower. Only the radio contact with his colleagues and occasional visits to Tosya prevent the complete loneliness. Like Seher, Nihat carries around a secret that brought him here. And it's also the secrets that bring these two people together. For when she stands with her back to the wall, the young seer is left with only a broken guard to create a new beginning, without having to charge herself with an unspeakable guilt…

With "Watchtower" director Pelin Esmer has created a calm but also very intense drama that tells its story with an intense visual language and carried by two strong main actors. Esmer often lets the images or the glances of her characters speak for themselves, without excessive, all-encompassing dialogues. But the story in its simplicity is also drawn in such a way that it does not need many words at all. The viewer quickly realizes which secrets the protagonists carry around with them. But even if the dramaturgical course is very predictable and there are no big surprises, this does not mean that the story would not be stirring.

For exactly the opposite is the case. By refraining from forcing any additional conflicts, Esmer's staging can concentrate on the essentials and build a tremendous strength despite the very calm, sustained narrative style. The subtlety with which Esmer, for example, draws the social image that drove Seer to Tosya can also fully unfold the oppressive atmosphere of the landscape. The interplay of the intense naturalness of the play of the two main actors, the restrained staging and the engaging visual language creates exactly what makes "Watchtower" so moving and powerful.

Who appreciates sophisticated arthouse dramas and strong acting cinema, who doesn't need a lot of speed and excessive dialogue to be captivated by a story and who likes to be captivated by a captivating visual language, can warmly be recommended this touching portrait of two people in search of a new beginning. Worth seeing