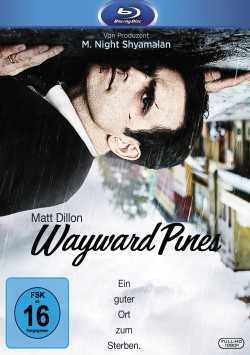 Film: In search of two missing colleagues, FBI agent Ethan Burke (Matt Dillon) lands with his car against a tree, only to wake up a little later in the hospital of the small town of Wayward Pines. In fact, the trail of the missing seems to be headed right here. But in the small town, Ethan only encounters a wall of silence. The local Sheriff Pope (Terrence Howard) is just as unwilling to help Ethan as the mysterious Dr. Jenkins (Toby Jones). Ethan can still track down his colleagues on his own. However, one of them is dead, the other, Ethan's ex-lover Kate (Carla Gugino), claims to have been living in Wayward Pines for several years. Ethan's attempts to bring them to their senses fail, as do his contacts with the FBI or his family. When suddenly his wife Theresa (Shannyn Sossamon) and his son Ben (Charlie Tahan) appear in Wayward Pines and three of them are stuck in town, Ethan is determined to solve the mystery around Wayward Pines against all odds. But the discoveries he makes put all his worst fears far into the shade…

With "Wayward Pines", the adaptation of Blake Crouch's trilogy of novels, "The Sixth Sense" director M. Night Shyamalan makes his first attempt at a TV series. Beside the direction for the pilot he also took over the role of the executive producer. After having to take a lot of scolding for his last movies, Shyamalan seems to have regained his old strength with this ten-part mini-series. The promos and the pilot at least let assume this, because they let assume a mixture of "Twin Peaks" and "Twilight Zone" with a pinch of "Lost". Instead of waiting with the dissolution until the finale of the first (and only?) season, the big secret was revealed around the middle of the season. And so the style of the story changed completely. You have to be able to get involved in that. But then the second half of the season also offers perfect mystery entertainment with lots of suspense and a thrilling atmosphere.

With actors like Matt Dillon, Terrence Howard, Oscar winner Melissa Leo, Juliette Lewis or Carla Gugino ("Sin City") the series is very prominent and well cast. The locations in British Columbia, Canada, provide for a constant build-up of tension as well as the little bit by bit presented secret about the rules to be followed in Wayward Pines, the strange behaviour of some inhabitants and the fact that here the clocks seem to work quite differently than in the rest of the world. Although at the beginning comparisons with series like "Twin Peaks" are almost inevitable, "Wayward Pines" very quickly manages to hit its own note and captivate the audience.

More shouldn't be revealed at this point. Just this much maybe: if you got involved with the big twist, then the last episode works really well as a season finale, but as a series finale it would be a little bit disappointing. But after a lot of critic praise and good ratings there is at least a little spark of hope that the makers of the series and novelist Crouch will get together to work out a sequel to the story about the mysterious small town in Idaho, which is at least as exciting and first class as these very good ten episodes. Absolutely worth seeing!

image + sound: The Blu-ray image is pin sharp and shows hardly noticeable loss of quality even in darker scenes. The colour scheme appears somewhat cool, which well underlines the very special atmosphere of the series. The sound is present in an atmospheric DTS mix, which remains somewhat reserved in many scenes, but which also provides audible movement and occasionally goosebumps in the multi-channel area through targeted sound effects and ambient noises. Good!

Extras: The bonus material consists of two short featurettes. The first one invites the spectator on a tour through Wayward Pines (approx. 8:59 min.), where the makers primarily go into the sets and the equipment. The second short documentary then deals with the mythology of the series, whereby it is not really possible to go into depth in just 10 minutes. Nevertheless, both features are well worth seeing!

Fazit: "Wayward Pines" is a gripping mini-series that begins like a mysterious "Twin Peaks" clone, but then quickly takes a completely different direction. If you can get involved in the drastic twist that Episode 5 brings with it, you'll get extremely exciting and densely staged mystery food of the finest quality. The Blu-ray presents the ten episodes in very atmospheric picture and sound quality. Only the bonus material consisting of two short documentaries could have been a bit more extensive. Still, it's clearly one thing here: absolutely recommended!