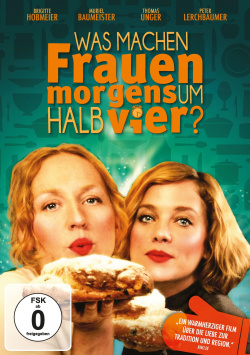 What do women do at half past three in the morning?

Content: The life of Franzi Schwanthaler (Brigitte Hobmeier) actually revolves around her daughter Marie (Emma Priesendanz) and the work in her father Josef's bakery (Peter Lerchbaumer). But when he suffers a heart attack and Franzi has to look after the bakery alone, she makes a shocking discovery: the family business is so heavily indebted that the debts can hardly be paid off. In addition, a branch of a baking chain has just opened in the small Bavarian village, which steals the Schwanthalers' so important customers with its dumping prices. The emergence of Franzis older sister Carmen (Muriel Baumeister) from Berlin doesn't make the whole thing any easier, as the two women constantly clash because of their completely different lifestyles. But just when all hope seems lost and Franzi is thinking about giving up, she comes up with the idea - and that's globalisation...

With "What do women do in the morning at half past three?" director Matthias Kiefersauer has staged a very charming mixture of drama and comedy, which deals with topics like globalisation, tradition and family in a very entertaining way. Supported by the two sympathetic leading actresses Brigitte Hobmeier and Muriel Baumeister, who are supported by no less convincing supporting actors, the film tells its story in a pleasantly easy, but never silly or flat-looking way. The initial situation is not really amusing. Because the disappearance of smaller traditional businesses, which have been in family ownership for generations, by internationally operating chains, whose dumping prices make customers overlook the lack of quality, is unfortunately a sad reality everywhere.

It is to be highly credited to Kiefersauer that he didn't make an overwhelming shock film out of this topic, but rather a light-footed comedy, which comes up with some more dramatic moments in exactly the right moments. The character drawing and the conflicts between the characters are not particularly original, but rather extremely predictable and at times even extremely clichéd. Nevertheless, the film works very well up to the last third. It's only towards the end that it becomes a bit negative that the comedy, created with the support of BR and ARD Degeto, is forced into a 90-minute TV corset that is a little too tight.

Since the film takes a lot of time at the beginning to introduce the characters and to build up the dramaturgy, the finale seems to be badly rushed. Although all conflicts are resolved, in the end the feeling remains that something is missing. A few more minutes to bring the story to a less mature end would have reinforced the very positive overall impression. So "What do women do at half past three in the morning" is good and entertaining entertainment with little blemishes that friends of likeable German comedies with light Bavarian local color should not miss. Worth seeing!

Picture + sound: The picture has a pretty good sharpness, which could have been a bit better in darker scenes. The colours are very powerfully coordinated and are particularly effective in the Dubai scenes. The tone is rather reserved, appropriate to the story, whereby the dialogues sound clearly understandable from the speakers. However, there are no bigger surround moments. All in all, however, there is one more satisfied one: Gut!

Extras: As a bonus, the DVD has interviews with leading actress Brigitte Hobmeier (approx. 4:13 min.), the producer Martin Choroba and the executive producer Franziska An der Gassen (ca. 4:19 min.), director Matthias Kiefersauer (ca. 4:57 min.) and actor Thomas Unger (ca. 4:38 min.). The interviewees then have to undergo a baked goods test (approx. 1:29 min.) in which they have to distinguish between a discounter and a quality bakery. Finally there is the trailer for the film.

Fazit: "What do women do in the morning at half past three?" is an entertaining mixture of drama and comedy, which can score with a likeable cast and some very nice ideas. The rather clichéd moments and the somewhat rushed ending only slightly cloud the positive overall impression. The DVD presents the film in appropriate picture and sound quality and also has some informative promo interviews as a bonus on board. If you like charming German comedies with a bit of Bavarian local colour, then you can take your chances here. Recommended