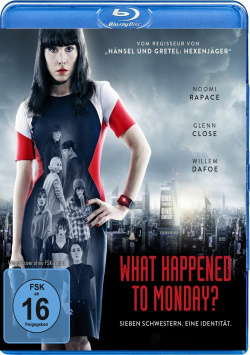 What Happened To Monday? - Blu-ray

Film: In the near future the world will groan under famines and overpopulation. In order to get these problems under control, a rigorous one-child policy is being implemented at the global level. This forces the seven Stettman sisters (Noomi Rapace) to grow up in secret. Their grandfather Terrence (Willem Dafoe) trained them for years to play a perfect hide-and-seek game. Each of them is only allowed to leave their common home on one day of the week - the day whose name they bear. In the safe four walls, each of the sisters may be as she wishes, but outside they must always pretend to be one and the same person. If her cover were blown, it would mean her certain death. This works out very well for a long time until Monday doesn't come home on a Monday…

The idea for "What Happened To Monday?" was already developed in 2001 and quickly made it onto the Hollywood Black List for the best scripts not yet filmed. Originally, two identical brothers were at the centre of the gloomy vision of the future. When director Tommy Wirkola ("Hansel und Gretel: Hexenjäger") took care of the material, the two brothers became seven sisters. The story is set in a not too distant future, scourged by problems that we already know - albeit not to this extent -. This makes the basic idea quite realistic and one understands the ideology behind the actions of the politician played by Glenn Close - even if her actions are not excused by it. But - and this is important for the film to work - the future that is designed here is rooted in the here and now. And that's what makes them so depressing and, to a certain extent, authentic.

Besides the thrilling story, which is only a little bit too conventional towards the end, the film lives primarily from the versatile play of Noomi Rapace, who perfectly manages to bring seven quite different characters to life. When all seven sisters act together, the viewer quickly forgets that this is really just a single actress. This reminds a little of Tatiana Maslany in the series "Orphan Black", in which she embodies completely different clones of a person. Rapace also manages to give each sister her own personality, even if she has comparatively little time for it.

"What Happened To Monday?" is an exciting, sometimes quite brutal dystopia, which is here and there even interspersed with a little satirical humor. The movie isn't perfect just because of its weak finale, yet it still offers damn good entertainment, which at the same time makes you think. Solidly staged in terms of craftsmanship and played super there is a clear vision for this future: Absolutely worth seeing!

Picture + sound: Technically there is little to criticize. There are no recognizable soiling or blurring, the coloration captures the mood of the film very well and the contrasts are also convincingly balanced. The sound is available in a powerful DTS-HD Master Audio 5.1 mix, which provides a good surround feeling in home cinema, especially in the action scenes. Good.

Fazit: "What Happened To Monday?" is an exciting and super played dystopia, which entertains well and also makes you think. Only the final was a bit disappointing. The Blu-ray presents the film in convincing blind and sound quality. The extras are not very extensive, but at least the view behind the scenes is worth seeing. Altogether there is a clear one for it: Recommendable!