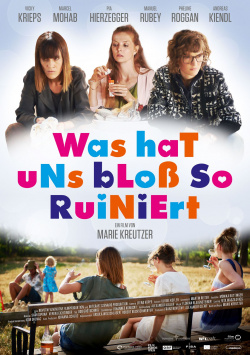 What ruined us so

They are young, do their thing and are simply happy: The friendly couples Stella (Vicky Krieps) and Markus (Marcel Mohab), Ines (Pia Hierzegger) and Chris (Manuel Rubey), as well as Migno (Pheline Roggan) and Luis (Andreas Kiendl) don't want to be bent by anything and anyone - not even by the offspring who has announced themselves to all three couples. But as soon as the children are in the world, reality catches up with the friends. And each couple must learn in their own way to deal with the fact that it is now over with the relaxed hipster life. And between diaper changes, nutritionists and playground visits it will become clear whether their relationships are strong enough to survive the change from "I" to "us"…

Ach yes, didn't we all think that we wouldn't become like the other parents? That we'll make everything different and better with our kids? That we'll make sure the little rascals don't turn our whole lives upside down? With the comedy "Was hat uns nurß so ruiniert" director Marie Kreutzer has made exactly this attitude collide perfectly with reality and shows in an entertaining way how differently parents deal with the realization that they are just like everyone else and are confronted with exactly the same everyday problems.

Who has ever observed the behaviour of other parents on a playground and can also look at himself with a little self-irony, will rediscover here in almost every second something from his own parents' everyday life. With very dry wordplay and really well observed situation comedy, the first hour of this big-city comedy is a good time. The performer ensemble additionally ensures that the whole thing works so well with a loosely authentic game. Even though there are a lot of clichés being tried out here, the whole thing somehow seems believable and natural - and this increases the pleasure for the viewer considerably.

In the last half hour, however, a bit too thick is applied when all the conflicts escalate. That's still quite enjoyable, but it loses a bit of the closeness to life that the first two thirds of the movie were characterized by. But the bottom line is that it's just whining at a high level. Because "What ruined us so much", with all its strengths and weaknesses, is an amusing, wonderfully cheeky and simply beautiful film that speaks from the heart of many young parents - or mercilessly holds up a mirror to them. But even those who have no offspring and simply like good German-language comedies should not miss this work. Absolutely worth seeing!

Kino Trailer zum Film "What ruined us so (Österreich 2016)"
Loading the player ...