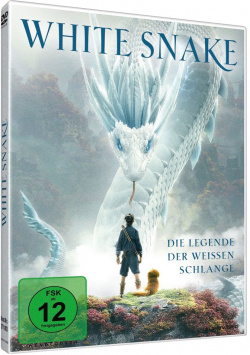 Film: The general of the imperial army pursues dark goals, which the white snake demon Blanca wants to prevent. But her assassination attempt on the general fails and Blanca finds herself in the form of a young woman in a village of snake hunters. Here she meets the young hunter Ah Xuan, who quickly falls in love with the young beauty. Even when he finds out that Blanca is actually a snake demon, it doesn't change his feelings. But a love between the two is impossible - not only Blanca's sister Vera wants to make sure of that. The power-obsessed general also has a score to settle with the white snake.

"White Snake" is based on one of the most popular Chinese folk tales. Even if "The Legend of the White Snake" is probably not very well known in this country and therefore it is a little bit difficult to follow the plot, especially at the beginning, it doesn't change anything about the extremely positive overall impression of this visually stunning animated fairy tale. The visual realization is really wonderful and takes the audience into a truly magical world, which is bursting with imagination. The animations may seem a bit edgy here and there, but especially the landscapes are beautifully realized.

What is not so positive, however, is the use of humor, which seems to be directed rather to a very young target group. This is contrasted by action sequences and other plot elements that are clearly aimed at an adult audience. So the production seems a bit unbalanced at least in places, but this is only marginally negative. Because because of the many well-done moments and the great pictures small weak points like this one are easily ironed out.

Besides the fantastic elements "White Snake" also tells a really nice love story, which really gets to your heart, especially towards the end. So, if you like epic fantasy fairy tales with fascinating creatures, magical images and a good portion of romance, you shouldn't miss this multiple award-winning animated film. You can be curious if there will be the sequel, teased in the credits - it would be desirable. Absolutely worth seeing!

Picture + sound: The absolutely clean picture convinces with a high overall sharpness and a powerful coloration. In some moments the animated film also shows a pleasant depth of image. All in all, the visual power of the film also comes across very well in home cinema. The sound is available on the DVD as a powerful Dolby Digital 5.1 mix, in which the surround channels are used audibly, especially in the action-packed scenes. Good!

Extras: As a bonus, there is a short making of (approx. 4:38 min.) and a more detailed question and answer session with the director (approx. 25:23), recorded at the animation festival. In addition there are two storyboard clips, three scenes in different stages of development, three music videos and three trailers. Good!

Conclusion: "White Snake" is a visually stunning fantasy epic, which can score with many imaginative animations and a beautiful story. At times the production seems a bit unbalanced, as some scenes are more appealing to children, while others might scare little viewers. But for somewhat older fans of magical fantasy food this thrilling fairy tale is a must. The DVD is technically well implemented, with the bonus especially the Q&A with the director is very worth seeing! All in all one: Absolutely recommendable!