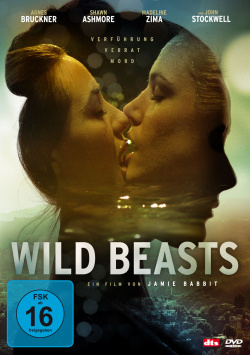 Contents: Law student Sara (Agnes Bruckner) is not a privileged student who can concentrate fully on her studies. She also has to work in a bar to pay the fees for the expensive college. When the arrogant Brooke (Shanna Collins) denounces her boss for being jealous that her boyfriend Eric (Shawn Ashmore) makes Sara look good, the attractive student loses this important source of income. So it doesn't help her much that she gets to know a new girlfriend, the mysterious Alex (Madeline Zima), who can at least distract her for a short time. But when Brooke also makes sure that Sara loses her scholarship and flies away from university, her anger explodes at her adversary. The new girlfriends are completely dissolved and imagine what it would be like if Alex would kill Brooke and Sara would take care of Alex's hated stepmother Nina (Kate Levering) in return. For Sara, these mind games are just a way to let off steam. For Alex, on the other hand, they are a binding pact. They kill Brooke, but make it look like Sara is the murderer, only to press her to actually stand by her word. A deadly cat-and-mouse game begins, which Sara seems to lose quickly...

With "Wild Beasts" TV director Jamie Babbit ("Girls", "Gilmore Girls", "Revenge") tries her hand at a thrilling thriller for a rather younger target audience. She makes very obvious use of John McNaughton's "Wild Things" from 1998 and the Hitchcock classic "Der Fremde im Zug". With Madeline Zima she was also able to hire an actress who was already able to show in the series "Californication" that she can play the perfect beastly seductress. Wild Beasts" could work really well in itself. But while "Wild Things" doesn't just score points with a cleverly constructed script, but also with relaxed eroticism, Babbit clearly holds back on this point. Although sex and seduction play an important role here, the whole thing is surprisingly staidly staged. And since the film lacks a certain spice and independence, the story never really gets going.

And this is also the case with "Wild Beasts". The fact that many clichés are used here and that the dialogues are not particularly profound would have been far less disturbing if the production had been more courageous and not so tense. Even though Madeline Zima, as a manipulative bitch, is able to pull something out at the end. And also the hypothermic atmosphere, which is created by the visual realization, helps that the movie has some worth seeing moments to offer. Wild Beasts" never comes close to the quality of its very clear role models. But despite all weaknesses the whole thing has a certain entertainment value, which is at least enough for fans of stylish and well cast teen thrillers to take a look at it.

Picture + sound: The audiovisual realisation of the film is consistently on a good average. The image is clean, the colours are mixed harmoniously and the sharpness of the image is particularly convincing in the brighter sequences. Small point deductions are only made in the darker moments. The sound presents the dialogues in a powerful and easily understandable mix, while the surround channels are used more discreetly. No revelation, but perfectly sufficient for a smaller thriller like this. Good!

Extras: As a bonus the DVD only has the trailer to offer.

Result: "Wild Beasts" is a rather good mixture of the cult erotic thriller "Wild Things" and the Hitchcock classic "The Stranger on the Train". Unfortunately, the staging lacks both the tingle and the independence to really captivate. Madeline Zima is very well cast as a manipulative bitch, but she must never play out her full potential properly. If you can overlook various clichés and rather flat dialogues, you will at least get solid entertainment, which is presented on the DVD in good picture and sound quality. In this case, the film does not necessarily have to be purchased immediately, but the rental from the (online) video store is highly recommended!