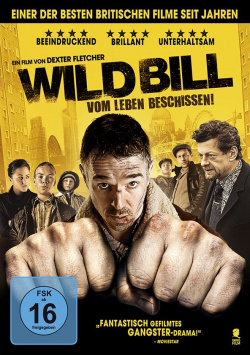 Contents: Eight years in jail are enough for Bill (Charly Creed-Miles). When he gets paroled, he just wants to start a new life. But when he comes into his old apartment, his plans are quickly ruined. Because his wife has run away and left his two sons Dean (Will Poulter) and Jimmy (Sammy Williams) alone in the grey apartment block. Bill has no desire at all to play father for the two boys, and the children can imagine something more beautiful than being raised by an almost unknown ex-con. But the Youth Welfare Office forces Bill to fulfil his father's duties if he does not want the children to be placed in foster families. That wouldn't look too good for his parole either. And so Bill tries his best as a caring father, while the 11 year old Jimmy gets more and more on the wrong track. The boy gets involved with his father's former partners of all people and makes a mistake that could have fatal consequences not only for Jimmy...

"Wild Bill" is the directorial debut of actor Dexter Fletcher ("Bube, Dame, König, grAs", "Kick-Ass"). The attempt to mix British gangster cinema with social drama and a touch of comedy is an extremely daring undertaking. But Fletcher usually hits the right note, which is why his movie neither copies the overused Guy Ritchie style too much, nor shows the sadness of a Ken Loach movie or degenerates into flat silliness. Fletcher rather tries to tell his story as unsentimentally and entertainingly as possible, whereby he also attaches great importance to an accessible character drawing.

That he succeeds pleasantly well, whereby neither Bill, nor his sons are at the beginning the really great bearers of sympathy. Dean is just bitter, Jimmy a bit naive and Bill doesn't want to have anything to do with his plagues. A terribly nice family just now. Bill's attempts to hand over the faithful family father against his will could easily have degenerated into clichéd absurdities. But Fletcher does without that as well as with all too great sentimentalities (if you maybe disregard a scene towards the end). Rather, Bill's approach to his sons takes place in a very lifelike and fragile way, so that a real happy ending is never really guaranteed even after a little reconciliation.

What's even more positive than the renunciation of kitsch, though, is the fact that Fletcher has managed to set the story in a very sad and hopeless world, without dragging the audience's mood down too much. Rather, he succeeds in incorporating small glimmers of hope and loosening moments into this gloomy environment again and again, through which a certain positive basic mood is built up. Wild Bill" thus gains both charm and entertainment value.

Dexter Fletcher's directorial debut is an entertaining gangster and family drama, an entertaining piece of British cinema that deserves to find its audience on DVD and Blu-ray. If you like British gangster cinema, that doesn't get by without excessive violence and action, you should definitely take a look here. Absolutely worth seeing!

Picture + sound: The reduced colouring and good picture sharpness capture the drama's dreary apartment block atmosphere very well. The picture on the DVD is also absolutely clean, there are no disturbances or noteworthy blurring. The sound is rather reserved, as the dialogues are usually in the foreground and music is used only sparsely. But every now and then, for example during a fight, well implemented sound effects also bring noticeable movement into the surround channels. Good!

Extras: As a bonus there are almost 12 minutes of edited and extended scenes to be seen, but they are presented without subtitle options. Otherwise only the trailer to the film and further program tips of the offerer are still offered.

Fazit: "Wild Bill" is a tidy social drama, which traces the desperate fight of an ex-cracker to rejoin society in an entertaining and stirring way. Director Dexter Fletcher contrasts the dreary mood of the story, which mainly takes place in grey housing estates, with a restrained, but pleasantly loosening humor, which is why his well played drama doesn't run the risk of pulling the viewer down completely. A good movie with a few small lengths, which are loosely balanced by the convincing actors. Therefore there is an absolutely deserved one for the technically well realized DVD: Recommendable!