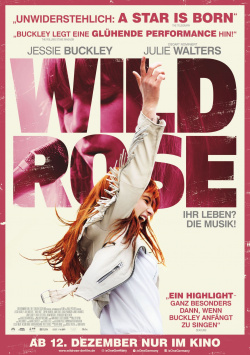 The young Rose-Lynn Harlan (Jessie Buckley) from Glasgow lives for music. Her dream is to make a career as a country singer. But her temperament often stands in her way. After serving a prison sentence, Rose-Lynn wants to get to Nashville as soon as possible and start all over again. Too bad she doesn't just lack the money and she's out on parole. There are also her two small children who grew up with her grandmother Marion (Julie Walters). And Rose-Lynn is now to take responsibility for them as well. Being a mother and earning money - there is actually no time to make a career. But Rose-Lynn doesn't want to give up her dream that easily…

"Wild Rose" is a thrillingly staged and well played musical drama that can score with a good soundtrack and a strong leading actress. The movie by Tom Harper ("The Woman in Black 2") actually only has one problem. The protagonist of the film isn't exactly a popular figure with her selfish and self-destructive behavior. Of course - and this is not a spoiler - she will have learned her lesson in the end. But until then she neglects her children, insults other people and always blames others for the success she has not achieved so far. And sometimes her behavior is just stupid.

As compassion, understanding or even sympathy can build up, it is damn difficult, no matter how well this character is played by actress Jessie Buckley. Moreover, it's also a shame that Harper builds up a quite authentic dramaturgy, only to drift towards a fairytale-like happy ending at the end. Granted, through the last act the movie actually becomes something like a Feel-Good-Movie. But on the way there, the director doesn't make it easy for his audience to take Rose-Lynn's side. This is probably primarily due to the fact that the sufferers of their behaviour are their children.

Nevertheless "Wild Rose" is a strong film in many respects, which works well as a plea to follow his dreams. Only the addition "… only not at any price" might have been emphasized a little more. In any case, Tom Harper is a stirring drama with an interesting main character in her broken way and with really good music (provided you have a slight weakness for country) - and despite some weaknesses there is still a clear one: Worth seeing!