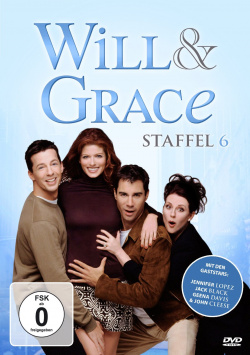 Content: Do you have, or don't you? When Will (Eric McCormack) and his best friend Jack (Sean Hayes) wake up together in a bed on the luxury yacht after the wild night of the fifth season finale, it is to be feared that they have crossed a line that could change their friendship forever. Fortunately, the mystery of what happened that night is quickly solved - but that doesn't mean that it will be quiet in the lives of Will, Grace (Debra Messing), Jack and Karen (Megan Mullally). Grace has great doubts about the loyalty of her husband Leo (Harry Connick Jr.) until he reveals the ultimate proof of love to her: He's leaving Doctors Without Borders to stay with Grace in New York. But can he really be happy with it?

While Grace has become sedentary with Leo, the relationship carousel still turns lively with the others. But Amor also seems to strike when Karen meets Lyle (John Cleese), a Brit who ignites the fire in her that seemed to have gone out since Stan's death. And Jack also finds his first boyfriend in Stuart (Dave Foley), with whom he even wants to move in together. And also Will finally finds a man in the policeman Vince (Bobby Cannavale) with whom he can imagine a future. But will he please Grace? Will the friends finally be happy? Will they comfort their new relationships that all their favorite series are being sold? Is Karen actually going to marry again? And will Jack go on tour as a dancer with Jennifer Lopez or will he become a nurse?

These are just some of the questions answered in the sixth season of the cult series "Will & Grace". This time the troop gets support from Jack Black as not very trusting doctor, Jennifer Lopez as herself, John Cleese as new man at Karen's side or Geena Davis as sister of Grace. The fact that not only the episodes cast with prominent guests, but almost every episode of this season, 13 years after its first broadcast, are still a lot of fun, testifies to the timelessness of this multiple award-winning sitcom. Surely, here too, as in the past seasons, one can recognize some elements that the ravages of time have not left untouched. But all in all, this cult series is simply funny and incredibly charming in its play with common clichés.

"Will & Grace" is wonderful TV entertainment for all lovers of classic sitcom food. Cheeky, adorable and just funny. If you already liked the first seasons, you can also take a look here. And since season 7 has already been announced, the waiting time for the next episodes after the dramatic season end around the relationship between Grace and Leo isn't too long either. Absolutely worth seeing!

Picture + sound: Here and there the picture appears a little blurred and with some faster camera pans a slight pulling effect is noticeable. Apart from minor soiling, the picture is very clean, the overall sharpness is on a good level for a TV sitcom over twelve years old, and the colour scheme is also convincing, especially in the brighter moments. The Dolby Digital 2.0 mix is also well mixed, with the very directionally mixed dialogues dominating the action.

Extras: As a bonus there are some very amusing outtakes on the fourth DVD (about 8 minutes) to see.

Fazit: After the long wait for the DVD release of further seasons of the cult sitcom "Will & Grace" after season 3, Koch Media has fortunately been getting a good deal going since season 4. Now season 6 is also available - and this shows how well the sitcom still works after more than twelve years. Some very amusing episodes and prominent guest stars like Monty Python star John Cleese or Jennifer Lopez make this box a must for all fans. Picture and sound quality are absolutely satisfying for an older comedy series and the funny outtakes in the extras ensure a good mood. Therefore the following applies again: absolutely recommendable!