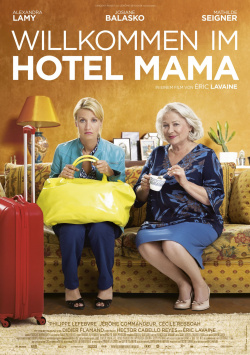 So far, 40 year old Stéphanie (Alexandra Lamy) has been on the road to success in life. But then her company suddenly goes bankrupt and she is faced with nothing. Now she is forced to move back in with her mother Jacqueline (Josiane Balasko). The widow is not at all enthusiastic about sharing her relaxed everyday life with one of her daughters again, especially as her children should not know that she has had a relationship with her neighbour Jean for years. Jacqueline has to sneak up on her old days to her lover and come up with lie stories to trick the all too curious Stéphanie. But at some point she realizes that hide-and-seek must stop and decides to introduce Jean to her children at a dinner together. But the evening is completely different than planned…

Sometimes one has the feeling that in France only comedies are filmed. Light entertainment, sometimes more, sometimes less realistic, seems to be the speciality of French filmmakers. Of course, French cinema has much more to offer in reality. But it's the comedies that sometimes attract millions of viewers to the cinemas in Germany as well. This is what the turbulent family comedy "Welcome to Hotel Mama" wants to achieve, which lives especially through the spirited play of Josiane Balasko. As a spry widow, she tries to fool her children into believing what she's doing is a lot of fun.

The result of their secretiveness is a gorgeous dinner scene that is undoubtedly one of the highlights of the sympathetic comedy. But Stephanie's attempt to set up an e-mail account for her mother or her very honest departure from the employment office also make for very enjoyable moments. But even if Lavaine tries to give the whole a little bit of depth through some social criticism, the end result remains relatively superficial. The reason for this is especially the finale, which is all too constructed and rushed. The whole story dissolves within a few minutes, which doesn't even fit to the other pacing of the movie. The whole last act somehow seems quite unimaginative and lacks the charm and humor with which the visit to the Hotel Mama could score until then.

However, even if the end is disappointing, the bottom line is that the overall impression remains quite positive. "Welcome to Hotel Mama" offers nice entertainment that sometimes makes you laugh, but mostly makes you smile. Not a big throw and nothing you wouldn't have seen before, but still a movie that makes you feel good. And that's enough to make the movie deserve a clear "worth seeing" for all lovers of light French comedies!