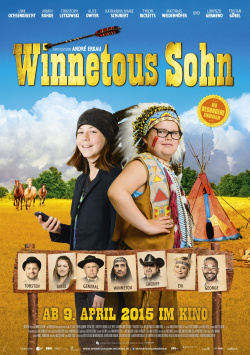 Ten-year-old Max (Lorenzo Germeno) has a big dream: he wants to become a real Indian. The Karl May Festival is looking for a new actor for the son of Winnetou. And that's exactly what the boy feels called to do. Too bad Max has nothing of an Indian, neither the statue, nor the condition, nor the eagle eyes. But that doesn't stop him from dreaming. Max hopes that he can reunite his parents (Alice Dwyer, Christoph Letkowski), who recently separated, as the star of the festival. And so he trains obsessively for the big day of casting. But he'll never make it alone. The closed Morten (Tristan Göbel), who actually finds everything stupid, and especially Indians, is supposed to help him...

It is generally badly determined around the German children's film. Too often the films conceived for a young target audience follow a clear pattern of purely commercial success. Charm, originality and cleverness usually fall by the wayside, as does closeness to reality. But from time to time there are also real little jewels in the children's film from Germany. Director André Erkau ("Das Leben ist nichts für Feiglinge") clearly succeeded with "Winnetous Sohn". With the exception of the director of the Karl May Festival played by Uwe Ochsenknecht, his characters are only slightly overdrawn. The adults in particular are not the silly caricatures that are presented in so many other children's films.

The humour is loving and skilfully avoids flat silliness, but still offers children enough material to laugh heartily. The story not only traces the emergence of an unusual friendship between two outsiders, but also functions as a declaration of love to Karl May's Western as well as a sensitive study of the fears of a young boy after the separation of his parents. All these different facets are served with refreshing lightness, without ever being superficial. Erkau has found the perfect mix to tell a story with depth easily accessible and extremely entertaining.

The experienced actors like Armin Rohde, Alice Dwyer or Uwe Ochsenknecht are loosely played against the wall by their young co-stars. Especially Lorenzo Germeno is the best proof for the fact that there are extremely talented child actors in Germany who can convince with a lot of naturalness and a completely unaffected play.

Naturally "Winnetous Sohn" also plays with some common clichés and uses some very simple gags. But all in all, this wonderful family comedy is a very original, loveable and well staged joke, which wasn't awarded the title "Special Children's Movie" for nothing. It only remains to be hoped that this quality will now also be appreciated by the audience. The film would have deserved it anyway: absolutely worth seeing for all children from 5 years, but also for the accompanying adults!