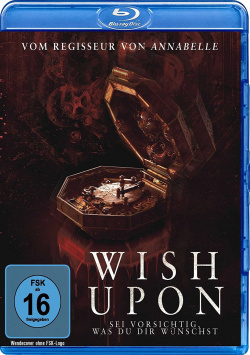 Film: As a small child Clare (Joey King) had to watch how her mother took her own life. Since this traumatic and until today inexplicable experience the girl lives alone with her father Jonathan (Ryan Philippe) in simple circumstances. With scrap collecting, Jonathan earns a modest living for himself and his daughter, which Clare often finds quite embarrassing. One day, while digging in a garbage can, he finds an already decorated box that could certainly earn him a lot of money. Nevertheless, he prefers to give it to Clare, who is immediately fascinated by the box and its inscription. It says that seven wishes are fulfilled for its owner. At first Clare doesn't believe it, but when her first two wishes come true she decides to use this miracle for a better life - not knowing that every wish costs a very high price…

"Wish Upon" is after "Annabelle" and "Wolves at your door" the next attempt of director John R. Leonetti in the horror genre. For this work, he makes uninhibited use of other genre contributions such as "Final Destination", "Death Note" and at one point also "Butterfly Effect", whose sequel Leonetti himself staged. You shouldn't expect any real surprises here - perhaps with the exception that the end comes a little unexpected in some ways. Otherwise, well-known clichés, wooden dialogues and actors like Joey King and Ryan Philippe dominate the action.

That doesn't sound really positive - but it's not quite as negative as it seems. Because for what the movie wants to be, it offers some decent moments of tension and a pleasant entertainment value. Yes, the story is full of logical holes and the dialogues are sometimes bad to the shame of others. But since this demonic wishbox doesn't pretend to be anything more than a pleasurable teen B horror, the negative aspects don't carry so much weight. And Joey King, who proved in movies like "Wish you were here" that she is one of the great talents of young Hollywood, really tries to give her very one-dimensionally drawn character some depth.

Who simply expects harmless teen horror fun without much blood and surprises will not be disappointed by "Wish Upon" either. If you really want to spook and get your horror served with unexpected twists and a good script, you might be tempted to wish this movie to hell. Nevertheless, the bottom line is a decent one: worth seeing!

Picture + sound: The technical implementation of Blu-Ray is at a good level. The picture sharpness is good and still offers a good detail display even in the many dark moments. The colour scheme is atmospheric and underlines the positive overall impression. The same can be said for the sound. Although it remains largely reserved, it offers a very effective carpet of sound, especially for the "creepy" moments. Good.

Extras: As a bonus there are three mini featurettes about the attic set (about 2:10 min.), about the box (about 2:32 min.) and  about the horror it brings with it (about 2:31 min.). It goes without saying that you shouldn't expect any in-depth information at this short runtime. In addition to these promo features, there is a two-part motion comic (2:05 + 1:38 min.) about the background of the box. The trailer and further film tips round off the very manageable additional offer.

Fazit: "Wish Upon" strives for many clichés, steals cheerfully from other genre representatives and shows some deep logic holes. Nevertheless, the movie is mostly entertaining and can actually tear something out with its ending. Not a masterpiece, but a nice pastime for a home theater night. Blu-ray technology is at a good technical level. The bonus material is very short, but the tour of the attic set and the motion comics are well worth seeing! All in all this means for fans of not too bloody teen horror: Recommended!