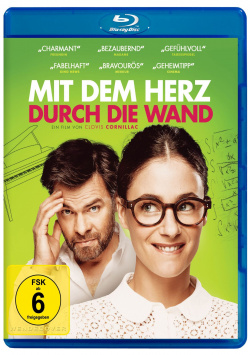 With the heart through the wall - Blu-ray

Film: A young inventor (Clovis Cornillac) loves silence and loneliness and hates other people for it. So far he has still managed to drive away every potential neighbour in the very bright apartment next door. But at the new occupant, a young pianist (Mélanie Bernier), he bites his teeth out. The only thing that'll help is to deploy the heavy artillery. But just when the two almost drove each other mad, they realize that they are not really unsympathetic. And slowly a tender friendship develops through the wall, which could actually become love. The only question is: is the wall between them an obstacle or does it protect the two from reality?

"With the heart through the wall", of course, the wheel does not reinvent itself. It's also not the first romance in which the lovers don't get to see each other most of the time. Nonetheless, director and main actor Clovis Cornillac has succeeded in creating a very charming romantic comedy, which besides some clichés also has some pleasantly original ideas to offer. The way in which the two neighbours try to drive each other crazy is as amusing as the "cooking together" on the first date. It's moments like this in which the movie can play to its strengths and offers its audience wonderfully light comedy food of the typical French kind.

However, there are also some scenes that seem a bit too hysterical or too flat. They spoil the fun a little, but in the end this only has a marginal effect. The casual staging, which with all its quirks nevertheless very lovable figures and a good portion of heart comfort over most of the weaknesses. That doesn't make the romance a masterpiece, of course. The whole thing's just too banal for that. This may sound very negative now. But Cornillac himself seems to know that he didn't create a highly intellectual art cinema, but just light entertainment food. And since his staging never tries to be more than it actually is, be banal here in a rather positive sense too.

"With the heart through the wall" is perfect food to switch off the brain and just get a nice sprinkling and get something for the heart at the same time. A film for an amused permanent smile, that especially lovers of light French romances will be able to enjoy for a while after the credits. And despite some weaknesses and a lack of depth, there is a very clear one: Worth seeing!

Picture + sound: The Blu-ray picture pleases with a high image sharpness, a pleasantly warm color scheme and neatly balanced contrasts. The tone is rather reserved due to the genre. But especially when the two neighbours get on each other's nerves with all sorts of noise nuisances, the harmonious DTS-HD Master Audio 5.1 Mix also ensures good utilization of the surround channels. Good!

Extras: Except for the trailer there is no additional material on the disc. Too bad!

Fazit: "Mit dem Herz durch die Wand" is not a very profound, but a really nice and funny romantic comedy, which is a bit flat at times, but can make up for this shortcoming with a lot of charm and original wit. The Blu-ray presents the charming hustle and bustle in harmonious picture and sound quality. Unfortunately, the viewer only has to do without bonus material here. Altogether there is a clear one for it: Recommendable!