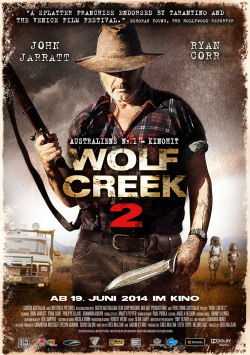 Mick Taylor (John Jarratt), the most sadistic killer of the Australian outback, is back! Almost a decade ago, the psychopath first caused fear and terror in the idyllic Wolf Creek National Park. Now he sharpened the knives again to kill unsuspecting backpackers. This time it's the German backpackers Katarina (Shannon Ashlyn) and Rutger (Philippe Klaus) who unfortunately camp directly in Mick's hunting ground on their tour through "real" Australia. And there's no escape against the serial killer. Even when surfer Paul (Ryan Corr) rushes to help desperate Katarina, the bloody nightmare is far from over…

The first part of "Wolf Creek" came to the wedding of the so-called "Torture Porn" movies a la "SAW" and "Hostel" in the cinemas and strictly followed the rules of this horror subgenre. Director Greg McLean took a long time to introduce the victims of the sadistic killer Mick Taylor. And just as much time was then spent on the torments he inflicts on them. This worked very well due to the deceptive idyll of the picturesque landscape and the wonderfully nasty game of John Jarratt. But meanwhile there were too many such films, so that the interest of the audience in further escalating torture has clearly diminished. It's just not enough anymore to add a scoop in terms of brutality to make the same formula even more interesting. That's what Greg McLean realized. And that's why in "Wolf Creek 2" he goes a little different ways than in the first album, but without saying goodbye to the successful concept.

This already starts with the opening sequence, in which Mick himself becomes the victim of two bored policemen. Of course, it doesn't take long for him to turn the tables, but it's interesting to see how McLean manages to make his merciless killer almost sympathetic in the face of the unjustified police harassment. When, after this very successful opening scene, the next potential victims of Mick are introduced, then it doesn't happen as overflowing as in the first part. Rather, the viewer learns the two German tourists only by means of a short montage and it only takes a few minutes until their romantic trip takes a bloody turn.

Statt now to rely on the proven torture scenes, McLean first of all pulls up the pace and offers the viewer a rapid chase, in which a herd of kangaroos also plays a decisive role. This is brutal, absurd - but also extremely entertaining. Only after this outback version of "Fast & Furious" is it time for surfer Paul in Mick's torture cellar. Of course, we don't want to reveal too much about the following scene at this point, just this much: McLean also tries to surprise us with what he already knows. And despite some allusions to the first part "Wolf Creek 2" never seems like a stale infusion of the original even here.

Surely it can now be argued that Mick Taylor somehow seemed more threatening because he was less often seen in the first movie and spoke less. This may be true in a way, but John Jarratt's game also prevents the psychopath from degenerating into a caricature in the sequel. With lots of well done moments of tension, a good pinch of action and a great camera work "Wolf Creek 2" can confidently be called a well done sequel that can be warmly recommended to all fans of the original. The only downer is that the uncut frame did not make it through the FSK. For the cinema and DVD/Blu-ray exploitation in Germany, the film had to be shortened a little. Some smaller cuts don't stand out, but there are two scenes in which the cuts are already annoyingly obvious. And especially for horror fans this is often reason enough not to go to the cinema or buy a DVD - even if it's only a few seconds. For those who don't care too much about cuts, there is still a lot of hearty food on offer, which deserves a clear "worth seeing"!