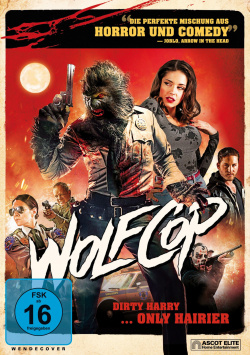 Film: It was to be foreseen that his preference for high percent would eventually become his downfall. But the unadapted cop Lou (Leo Fafard) didn't expect that: Drunk to death, he is transformed by an occult cult into a werewolf. From now on, he always becomes a beast of tears on a full moon. But this curse cannot destroy one thing: Lous sense of justice - and his penchant for alcohol, donuts and beautiful women. And so, from now on, as Wolfcop, he will see to justice. The bad guys have to dress pretty warm from now on...

"Wolfcop" was created in just 17 days for a mini-budget, which director Lowell Dean has set up with the help of the project CineCoup. In view of the short shooting time, the small budget and especially the title, nothing other than amusing trash should be expected. You have to get involved with the completely absurd basic idea and the at times slightly cheap looking style of the movie, so that the full fun factor can unfold. But if this succeeds, then this somewhat different werewolf film proves to be a great pleasure. The movie can definitely claim the first place for the probably weirdest sex scene of the year.

The werewolf makeup may not necessarily correspond to the latest state of the art, but it brings back nostalgic memories of the early werewolves of the Hammer-Studios era. Just the fact that they were still working with handcrafted effects and didn't use CGI effects alone gives them a certain charm. This is intensified by wonderfully absurd ideas like a traditional "Drink ´n` Shoot"-Festival. In addition, Dean skilfully plays with countless clichés of horror genres and cop films, whereby the mixing of such clichés creates extremely amusing moments.

The fact that Leo Fafard plays his character with a certain seriousness also increases the comedic effect of the whole. Some neat action sequences and light horror elements provide the perfect counterbalance to the humor and make "Wolfcop" a perfect party movie. Lowell Dean has managed very well to stage an entertaining B-movie persiflage, in which his love for the subjects, which are taken for a ride here, becomes more than clearly perceptible. The best werewolf copmovie comedy mix since films were made - and there is - at least for lovers of charming trashy horror food - a very hairy one: Absolutely worth seeing!

Picture + sound: There's hardly anything wrong with the audiovisual realization of the film. The picture pleases with its powerful colors, its somewhat trashy look and its good overall sharpness. The DTS-HD Master Audio 5.1 Mix has some good surround moments to offer, the dialogues, on the other hand, are somewhat centrally mixed in the German language version, while in the original they sound somewhat more harmoniously integrated into the action. All in all, the technical implementation is completely what you can expect from a small independent production. Good!

Extras: The Blu-ray has a lot of good extras to offer. It starts with an audio commentary worth listening to, in which you learn a lot about shooting with Mini-Budget, working with CineCoup and creating the effects. A really entertaining commentary, but without a subtitle option. Unfortunately, this also applies to the worth seeing Making of (approx. 45:52 min.), which deals pleasantly in detail with different aspects of the production. It continues with a music video, as well as three comedy clips (Die etwas anderen Outtakes, Fallschirmspringen bei Vollmond, Wolfcock) with a total running time of almost 5 minutes.

Three further clips are dedicated to the project CineCoup (ca. 4:06 min.), with whose help "Wolfcop" could be staged and marketed. And finally there are six mission videos (about 12 min.), which are worth a look in any case.

strong>Fazit: Schräg - schräg - schräger - "Wolfcop"! This indie horror comedy is probably the most wacky werewolf film of recent years. Even if some effects are a bit trashy and not every gag is right, it is simply fun to watch the werewolf cop at work. On Blu-ray, the film presents itself in good picture and sound quality and also has some really good extras to offer. For horror fans, who like it weird and hairy, this disc is also: Absolutely recommendable!