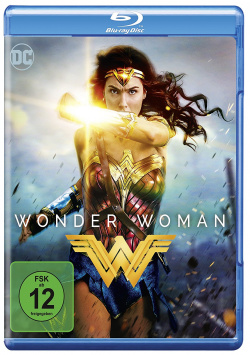 Film: On a small island, safely shielded from the rest of the world, Amazon princess Diana (Gal Gadot) is trained to be a strong warrior. She has no idea what truly divine power lies dormant in her. Only when the young pilot Steve Trevor (Chris Pine) is washed to the beach after a crash landing, pursued by enemy soldiers, Diana gets an impression of the world, which lies apart from the protective umbrella. And that impression is not a good one. So she decides to accompany Steve and fight for humanity against evil. For she is convinced that the bloody turmoil of the First World War can be stopped if she succeeds in defeating Ares, the god of war. And so Diana goes into battle - and Wonder Woman is born!

"Wonder Woman" is the latest contribution to the DC Extended Universe, which, according to Christopher Nolan's "Dark Knight" trilogy, has not yet been under a good star. Even though "Man of Steel" and "Batman v. Superman" didn't really go swimming at the box office, the movies didn't go down very well with critics or fans. "Suicide Squad" was a step in the right direction, but still couldn't really meet the expectations of many fans. The good news, however, is that the movers and shakers have listened to criticism and apparently learned from it. Because apart from the once again somewhat overloaded finale, "Wonder Woman" does everything right that was criticized about the other DC movies.

Director Patty Jenkins, who incomprehensibly hasn't directed a film since her award-winning debut "Monster" in 2003, creates the perfect balance between classic adventure film and great fantasy cinema, spiced with just the right pinch of winking humour. Gal Gadot has already proven in "Batman v. Superman" that she is the perfect choice for embodying the comic book heroine created in 1941. But it is only here that it can really show off all its strengths. Gadot convinces as an action hero as well as an actress. Since she is not only reduced to a warrior in a sexy outfit, the Israeli actress can actually give the character something like depth - something that her colleagues Superman and Batman in the DC Extended Universe have missed so far.

The movie also profits from the good chemistry between Gadot and Chris Pine, who gives a very charming hero, but the main character never steals the show. Because that's Wonder Woman's film - and a real novelty: The first blockbuster with a superheroine (the debacles "Catwoman" and "Elektra" don't count and should better disappear from the collective comic fan's memory anyway) - and a really great one!

Also it should be mentioned positively that the movie - unlike the other DC movies - is no longer so gloomy and is currently playing the first big action sequence in beautiful daylight. This not only increases the show values, but also the fun factor of the movie. But also "Wonder Woman" is not completely free of weaknesses with all earned praise. So the top villain can only convince to a limited extent and at the end the style takes over again, for which Zack Snyder had to take so much criticism with his movies. But even if the last act isn't quite convincing, "Wonder Woman" is a really well done comic movie and a great superheroine movie, which offers the audience action, great effects, suspense, humor and a little bit of romance. What more could you ask for? That's what it's all about: Absolutely worth seeing!

>Picture + sound: After the last DC movies were mainly dark, "Wonder Woman" convinces at the beginning with many bright scenes, which are characterized by a powerful coloring. With the scenes in the war happening more and more the colours give way and the all too familiar darkness takes over the helm. After all, contrasts and sharpness of detail are at a high level here as well, so that the enjoyment of the film is not further clouded. The Dolby Atmos mix is very lively and lets the very powerful sound effects as well as small background noises come into their own. Very good.

Extras: The bonus material starts with an amusing epilogue to the film (approx. 2:41 min.), which has even been dubbed for German release. This is followed by a commercial making of about the making of the film (ca. 16:26 min.). Under the heading "The Vision of a Director" there are five short documentaries about the hidden island (approx. 4:56 min.), about the battle on the beach (approx. 4:56 min.), about the old photography, which was already shown in "Batman v. Superman" (ca. 5:07 min.), about Diana in the present (ca. 4:39 min.), and about Wonder Woman in War (ca. 5:03 min.) - a scene that has been extremely important to Patty Jenkins from the beginning.

This collection of featurettes is followed by further short documentations about the Amazons (ca. 9:35 min.), about the three great legends in the DC Universe (ca. 16:05 min.), about the meaning of Wonder Woman (ca. 23:08 min.), as well as a look behind the scenes (ca. 15:34 min.). All these features are a mixture of interviews, footage from the shooting or the preparations, as well as various film clips. Especially for fans there are some very interesting and worth seeing moments, but overall the whole thing remains quite superficial despite the abundance.

At the end of the bonus material there are five more extended (about 9 min.), as well as an alternative scene (about 1:04 min.) and some amusing outtakes (about 5:37 min.). All in all a neat one: Worth seeing!

Fazit: "Wonder Woman" is probably the best and most entertaining film from the current DC universe so far. An action-packed adventure movie, that also doesn't miss out on humor and that can convince with a really strong heroine. The Blu-ray pleases with a very good conversion of image and sound. The almost two-hour bonus material illuminates various aspects of the production and the character Wonder Woman, but ultimately only scratches the surface. Nevertheless, all this is absolutely deserved for submission: absolutely recommended!