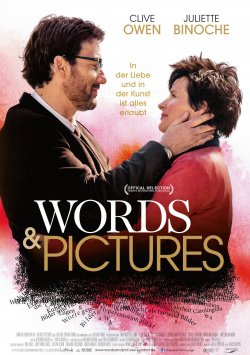 Once Jack Marcus (Clive Owen) was a celebrated writer. But for years he hasn't written anything and drowns his frustration in alcohol and cynicism. His work at a boarding school in New England he does only routinely, which could actually cost him his job now. But of course Jack doesn't want to give up that easily. The fact that the hypothermic painter Dina Desalto (Juliette Binoche) is now taking over art lessons at school and thus becoming Jack's direct competitor is not exactly making things any easier. A pleasurable feud quickly develops between the two, as Dina claims that the fine arts are more important than the written word. And, of course, Jack can't let that sit on his head. He challenges Dina to a duel in which it is soon about much more than just words and pictures…

With "Words & Pictures"  director Fred Schepisi ("Roxanne", "Wild Creatures") has staged a very charming comedy about an intellectual duel of a special kind. Does a picture really say more than a thousand words? Or is the written word superior, since it is said that the pen is more powerful than the sword? How Jack and Dina try to portray their respective art forms as the better and more important one is wonderful to look at just because of the wonderful dialogues. The two leading actors Clive Owen and Juliette Binoche play a decisive role in the success of these scenes. Between the two the sparks sparkle, both on an intellectual and on an emotional level.

This humorous part of the film is repeatedly broken by serious moments in which it is shown what ballast these two so talented people have to carry around with them. On one side is Jack, who seems to throw away his talent for alcohol, leaving only chaos and emotional destruction on his way. Again and again he has the opportunity to feel happiness, be it through the kitten of the relationship with his son, through the retention of his work or even through Dina. But every time he stands in the way of his own happiness, which makes him a rather tragic figure under his always cheerful, quick-witted façade. The same applies to Dina, who is no longer able to paint as she used to due to a disease of her joints. She's lost every spark of joie de vivre. Only Jack manages to breathe some passion into her again in his very special way.

Hin and again "Words & Pictures" loses itself in trivialities. For example, there is a secondary strand around Dina's best student Emily (Valerie Tian), who is constantly harassed by a classmate with whom Jack has a special relationship. This part of the story has its justification. But it is dealt with much too quickly after a detailed construction. The pupil, who seems to play a central role in the first third of the film, simply disappears from the film without a sound. It's such small weaknesses that prevent "Words & Pictures" from fully unfolding its potential and even from drifting into the shallows.

However, even though Fred Schepisi didn't succeed in making the big success, his movie is still a very nice mixture of drama and romantic comedy with two wonderful main actors. With a lot of charm and wit "Words & Pictures" spreads a lot of good mood despite some rather dark character moments and makes sure that the audience leaves the cinema with a lot of joy in their hearts. And for that there is a very clear one: Worth seeing!