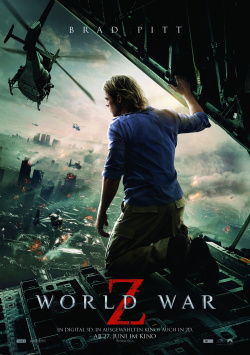 It's a normal morning for Gerry Lane (Brad Pitt), a former United Nations investigator. A normal morning he spends with his wife Karen (Mireille Enos) and his two daughters Rachel (Abigail Hargrove) and Constance (Sterling Jerins).  But what begins as an idyllic morning suddenly turns into a nightmare when the family finds itself in the midst of a zombie epidemic triggered by a virus, which seems to spread rapidly all over the world. At the last second, Gerry manages to get his family to safety. But now his professional skills are in demand. Tell him to find out where the disease broke out. Because only with the help of Patient 0 can a helpful antidote be produced that prevents the entire human race from turning into zombies. And so Gerry begins an odyssey around the globe, where his most dangerous opponent is not the zombies, but time!

Marc Forster is a director who never stops on the spot. Again and again he dares to explore new genres, to which he then tries to add his very own handwriting. Whether drama, James Bond, war movie or comedy, Forster shows a creative versatility in the course of which he has also developed a recognizable style. This also reveals itself during his excursion into the currently so popular zombie genre. "World War Z" is based on the book "Operation Zombie" by Max Brooks, the son of the legendary comedy director and actor Mel Brooks. The book is written in the style of an interview collection in which survivors of the zombie war tell about their experiences ten years after its outbreak. The reader learns how the epidemic broke out and spread throughout the world, how ordinary people and governments dealt with the crisis. It is a very original variation of the zombie myth, which of course was difficult to film in this form.

The scriptwriters Damon Lindelof ("Lost"), Drew Goddard ("Cabin in the Woods") and Matthew Michael Carnahan ("State of Play") obviously tried to filter out some elements of the book and weave them into a story in the classical sense. They were based on a script by J. Michael Straczynski, which, although it was highly praised when a first version was distributed on the Internet, was not promising enough for the producing studio. The delays caused by the repeated rewriting of the script were only the beginning of numerous problems with which production was confronted. When finally some re-shoots were scheduled, especially for the finale, the atmosphere between director Forster and lead actor Brad Pitt was so tense that both of them allegedly only communicated with each other via third parties.

The finished film unfortunately has all these production difficulties to offer. The decision not to tell the story from the point of view of several people, as in the book, but only from the perspective of one individual, is certainly a positive one from a purely dramaturgical point of view. But in order to achieve a similar effect as the book suggestions, the character drawing would simply have had to be more interesting and less clichéd. The well-behaved father of a family, who accepts his mission less for the good of mankind than for the survival of his wife and daughters, is simply not interesting and multi-layered enough to give the whole a special touch.

However, Forster succeeds in this with its visual implementation. The attacks of the zombie hordes, which sometimes happen at lightning speed, are impressive and mostly very exciting. Whether in icy cold, in the air or in the cool corridors of a research laboratory, whenever Gerry has to flee from the infected, the voltage level of "World War Z" rises drastically. But whenever the story itself gains the upper hand, this zombie variant simply lacks bite. The satirical or socio-critical undertones of the book are only rudimentarily present here. Whether J. Michael Straczynski's version came closer to the original and whether the lack of willingness to take risks on the part of the studio can actually be blamed for the fact that the story is presented a bit too ordinary and diluted at the end can only be assumed. The fact is, however, that the character of Gerry Lane has too few corners and edges to make him a really interesting hero, whom you as a viewer like to accompany in his feverish search.

So the whole thing is still fun, exciting and worth seeing. But the global zombie invasion has unfortunately not become something special. After all: Apart from the sometimes a bit too strenuous hand camera wobble optics and the amazingly flat 3D effects, "World War Z" is really a feast for the eyes. It's a shame that the possibility of turning the spectacle into a clever genre with a lasting effect, where you hope for a possible sequel right after the credits, was only used to a limited extent. And therefore: for everyone who is not looking for more than rapid zombie action with some tension and great effects, "World War Z" is absolutely worth seeing. But if you hope for an intelligent story that also claims the zombies' favorite food, you'll leave the cinema disappointed.