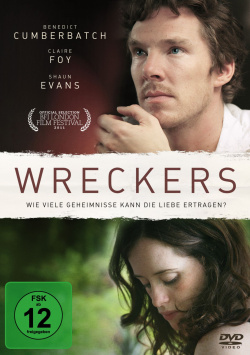 Contents: Dawn (Claire Foy) and David (Benedict Cumberbatch) move to the country near David's old home village. Here they want to renovate an old house and create a cosy nest for a small family. However, it is precisely the family foundation that does not really want to work out, which increasingly burdens the relationship between the two. In this tense situation place unannounced David's brother Nick (Shaun Evans), who has deserted after traumatic experiences in Afghanistan from the army. His appearance tears up old wounds in the brothers and also increasingly pulls Dawn into the dark past of her husband…

"Wreckers" is a small, quiet indie drama from 2011, which is finally available in Germany due to the steadily increasing popularity of Benedict Cumberbatch. Director D R Hood has staged a drama with small thriller elements, that manages with just a few words and completely avoids bold scenes. Here most of it is only hinted at or expressed in the facial expressions of the characters. Thus, even at the end some questions remain open and thus the movie leaves a certain amount of room for different interpretations.

The film thrives on its strong actors, but also on the very special visual aesthetics with which Hood is able to captivate her audience. She succeeds excellently in building up an engaging idyll, which she gradually exposes as extremely deceptive. Although the story itself is rather conventionally knitted, the staging at the end surprises the viewer as to how the events and the characters have developed.

For lovers of small arthouse dramas, who attach great importance to atmospheric density and good actors and can do without a fast-paced production, "Wreckers" is an absolutely worth seeing movie despite some lengths. Those who generally find it difficult to tell a story at a somewhat unwieldy pace might, after a while, feel something like light boredom.

image + sound: The image captures the film's fascinatingly hypothermic mood very well. The image sharpness is at a very high level and allows even smaller details to come into their own. The colours are atmospheric and underline the captivating visual language of the film. The overall sound is very restrained, but with an atmospheric sound backdrop it creates a positive overall impression. Good.

Extras: Unfortunately the DVD does not have bonus material to offer.

Fazit: "Wreckers" is a small, quiet drama that leaves much unsaid and relies mainly on dialogues and the strong play of its actors. Who likes calm, unagitated British dramas with light thriller elements should not miss this early work from the career of Benedict Cumberbatch. The DVD presents the TV production in good picture and sound quality, unfortunately there is no bonus material. Recommended