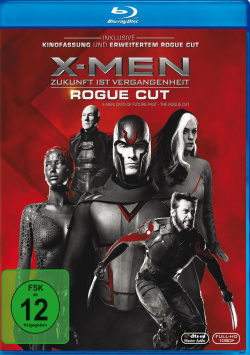 Film: In the not-too-distant future, the battle between humans and mutants is completely out of control. The Sentinels, huge fighting machines developed by Dr. Bolivar Trask (Peter Dinklage), hunt not only for the mutants, but also for all people who try to help them. The result is unimagined destruction, suffering and death. There's a war going on that could mean the end of all mankind. The only chance to avert this is to send Logan alias Wolverine (Hugh Jackman) into the past. In the 1970s he was supposed to visit the younger self of Charles Xavier (Patrick Stewart/James McAvoy) and get him, together with Magneto (Michael Fassbender), to prevent the event that led to the construction of the Sentinels. But the fact that Magneto is in an almost impregnable high-security prison is still the least of the problems. And the time that Logan still has in the past is getting scarcer and scarcer, because the Sentinels have long since tracked him and the other mutants in the future...

After four "X-Men" movies and two "Wolverine" adventures, one might think that this superhero universe can't be given a new cinematic side. But Bryan Singer, director of the first two "X-Men"-movies, did exactly that. His "X-Men: Future is Past" can be seen as a continuation of both "X-Men 3" and the reboot "X-Men: First Class". At the same time, by interweaving two time levels, the cards will be shuffled completely new, so that this franchise can now start into a new, exciting future. And by the way, "X-Men: Zukunft ist Vergangenheit" has also become a really good, exciting, spectacular and extremely entertaining superhero movie, which can not only convince on a purely trick technical level.

Sicherlich, as with all movies dealing with the subject of time travel, there are also some logical holes here again. The fact that Wolverine's trip to the 1970s negated some of the events from the earlier films could also be offensive to some fans. But since everything else is right, possible points of criticism quickly fall into oblivion. At the latest, when Quicksilver (Evan Peters) is allowed to use his abilities in a great sequence when Magneto erupts from the Pentagon, the last complainer will probably fall silent. Singer finds the perfect mixture of action-packed suspense, dark future vision, humorous 70s nostalgia and tongue-in-cheek irony. He gives his ensemble of two "X-Men" generations enough room to show real acting skills.

James McAvoy as a broken and totally discouraged Charles Xavier, Jennifer Lawrence as Mystique on the dark side and Michael Fassbender as a young Magneto deliver really great performances, which is not a matter of course in a special effects spectacle of this kind. And Hugh Jackman as Wolverine is cooler than ever. One notices that Jackman loves this character and tries to develop it further. Some supporting actors, such as "Ziemlich beste Freunde" star Omar Sy, Oscar-winner Halle Berry or Ellen Page, are drowning a bit next to the very dominant main actors. But even if there might be the impression that Storm is completely unnecessary in this movie for a short time, every single character proves to be an important part of the whole at the end, which becomes even more apparent by the very nice, even though only a few seconds long appearances of some of the beloved characters from the first movies.

To be able to understand all plot elements and allusions in "X-Men: Future is Past", at least part 2 and 3, as well as "First Class" should be known. If you haven't seen these films, you might find it difficult to follow what's happening in some places. But even without this helpful previous knowledge, the comic filming is simply great fun. Singer has set the bar damn high for the upcoming superhero movies. He has staged first-class entertainment cinema that offers enough space for action, great special effects AND an exciting story. Clearly one of the best blockbusters of the past year and therefore also: definitely worth seeing!!

The Rouge Cut: In addition to the cinema version, the Blu-ray also includes the new Rouge Cut. It runs about 17 minutes longer than the cinema version and inserts a complete storyline that Bryan Singer had removed from the cinema version with a heavy heart. This strand revolves around the mutant Rouge (Anna Paquin), who is so popular with many fans. While Logan fights for the future of humans and mutants in the past, Professor Xavier (Patrick Stewart) and Magneto (Ian MacKellen) release her from an all-too-familiar prison so that she can play an important role in the mission. In addition to this storyline, there are also other additional or re-cut scenes. Especially a longer sequence between Raven and Hank (alias Mystique and Beast) has to be emphasized. All in all, this version leaves a more coherent impression in many moments than the already very good cinema version. Especially fans of the first parts can't avoid this version!

Picture + sound: Anything but first-class quality would have been a bitter disappointment with this Blu-ray. But even here the "Rouge Cut" does not disappoint. The picture is absolutely clean and the colors are mixed very atmospherically. The image sharpness is also very high and allows even the smallest details to come into their own. Moreover, the 2D version of the film shot in 3D also has a pleasant image depth, which comes into its own especially during the brilliant finale. The sound mix is also convincing all along the line. Numerous sound effects ensure that the surround channels are almost completely in use. All in all there is a deserved one here: Very good!

Extras: The movie disc offers two audio comments. Director Bryan Singer and scriptwriter Simon Kinberg will comment on the cinema version, while John Ottman will comment on the Rouge Cut Singer and composer/cutter. Both comments offer some interesting details about the making of the film and are praiseworthy presented with optional subtitles. The first disc also offers a second screen app for interested viewers.

The rest of the bonus material is on the second disc. The core here is a 9-part Making of (approx. 52:41 min.), which deals not only with aspects such as film music or the path from comic to film, but also with the decision to cut Rouge out of the cinema version. Besides this well worth seeing documentary there is an interesting and entertaining round of talks with the actors and filmmakers (about 30:11 min.), picture galleries and a short preview of the new "Fantastic Four" movie (about 1:49 min.). Gut!

Fazit: "X-Men: Future is Past" was already a great superhero movie in the cinema version. The new "Rouge Cut" is a rounder and better version of the film for fans, which integrates additional and alternative scenes into the film in addition to a complete storyline. If you prefer the cinema version anyway, you will of course get it here, too. In addition to the two cut versions in very good picture and sound quality, the double Blu-ray also has two audio commentaries and almost 90 minutes of worthwhile extras to offer. Fans definitely need to access it. absolutely recommendable]