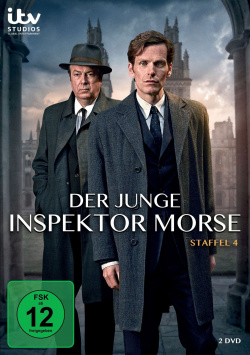 Content: "The Young Inspector Morse", the successful prequel series of the British crime classic "Inspector Morse" (1987 - 2000) enters its fourth round. And the series about the young Endeavour Morse (Shaun Evans), who laid the foundation for his career as an investigator in Oxford in the 1960s. About the third season and more backgrounds to the series we had already reported HERE. The dramatic events of last season's finale also have consequences for the new episodes. Joan has left Oxford plagued by guilt. Only now can Endeavour admit his feelings for Thursdays daughter. An almost tragic development for the character - because fans know more about Endeavour's sad fate in matters of the heart through the earlier series. Thursday and his wife are also suffering from Joan's disappearance and you can see that the pressure that is now on everyone involved is also affecting the investigation work.

Zwar are Endeavour and Thursday real professionals in their field, who do not allow their private lives to influence their investigations. But in the fourth season of "The Young Inspector Morse" this is made increasingly difficult for them. The great strength of the successful prequel is also crystallizing more and more clearly here: on the one hand, criminal cases are dealt with that are generally more conventionally structured, but simply timelessly well staged. On the other hand, the main characters continue to evolve, which is not a matter of course in crime series. Knowing what kind of man and investigator Morse will be twenty years later and how his career and life will end, some aspects of the story are filled with a certain tragedy, which is pleasantly subtle.

Shaun Evans once again proves to be an ideal cast for the young Endeavour Morse. With a mixture of elegant coolness and vulnerability hidden behind his emotionally serene façade, he becomes more and more the most interesting investigator television has had to offer for a long time. Let's hope that this great crime series will remain with us for a few more seasons, even if only to see how the characters develop further.

And that's what the very gripping new episodes of the fourth season are about:

Joan Thursday secretly disappears from Oxford, leaving her family and Endeavour Morse with broken hearts behind. But instead of despairing, Morse plunges into work. The body of Professor Richard Nielson, who has been missing for a month, is washed up on the banks of the river. Her condition indicates the man's been dead for weeks. Nielson was part of the team that developed a chess computer. More and more drowned people are being fished out of the water at Oxford. Morse suspects a serial killer. The pattern of deaths also suggests a murderer with chess skills. Thursday isn't much help with the investigation, though. He still hasn't got over his daughter Joan leaving the family. He takes his frustration out on Morse. Due to an alleged mistake in sending his exam papers, Morse passed his exam as a sergeant. This means that he is bound to the Oxford City Police Station for another year - much to the delight of his superior Bright. (Text: ZDF)

The self-proclaimed moral guardian Joy Pettybon is visiting Oxford to promote her campaign to preserve social morals. When she receives death threats in the mail, Morse is ordered to protect her. He also investigates the death of bricklayer Brian Finch, who seems to have been strangled with a rope. The autopsy then reveals that he died of heart failure. That's why Morse suspects the murder is a staging. Finch most recently worked in a villa rented by the controversial pop group Wildwood. In the villa recordings for a well-known TV show are currently taking place. Joy Pettybon finds the show offensive and would like to ban it most of all. (Text: ZDF)

In Cowley Hospital an unusually large number of patients died in a short time, all of whom were accommodated in bed ten on the same ward. The last to die is prison inmate Terence Bakewell, who Morse was supposed to be guarding at the hospital. Chief Superintendent Bright suddenly collapses in his office. He is admitted to Cowley Hospital and operated on by the elderly Sir Merlyn Chubb, who was also the doctor of all patients in bed ten. After the operation, Bright is also taken to the fatal infirmary. Besides, the only living Mrs. Zacharides is found dead on her estate. Everything points to a natural cause of death. Her husband, who died six months ago, was also a patient at Cowley Hospital. Morse learns from the couple's daughter that Mrs. Zacharides was in a clinch with the hospital because some of her husband's things were stolen from the hospital. (Text: ZDF)

When a corpse is discovered near Oxford, police believe they found Matthew Laxman, who disappeared five years ago. Thursday and Morse are reopening the case. Laxman was last seen by a hitchhiker reporting that he was on his way to Bramford. When Morse wants to question the inhabitants of the village about the events of that time, he stands in front of closed doors again and again. Morse is also not allowed into the nearby nuclear power plant. The power plant could be related to the case because Laxman was a known nuclear opponent. To top it all off, Morse's apartment is also searched and ravaged by burglars. (Text: ZDF)

Picture + Sound: Compared to the third season, nothing has changed in terms of picture and sound quality: Sharpness, colouring and contrast adjustment in the brighter scenes are on a good TV level, only in darker moments there are occasionally smaller blurs and slight picture noise. The stereo sound is absolutely convincing with the well mixed dialogues and the matching music. Good!

Fazit: The fourth season of the successful crime series "The Young Inspector Morse" offers not only very exciting criminal cases with 60s flair again. What makes the series so successful in its fourth year is the development of the main characters, which reaches a new dramatic climax in this season. The four episodes in feature length are available on two DVDs in good picture and sound quality. As a bonus there are a few interviews and a look behind the scenes. Anyone who appreciates British crime series of a particularly outstanding kind should not miss this DVD: absolutely recommended!