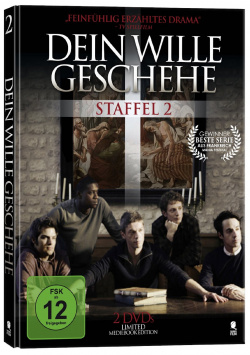 Content: The second year of study for the candidates for the priesthood in the venerable Capuchin monastery in Paris starts with some dramatic changes. After the departure of Abbot Primus Father Fromenger (Jean-Luc Bideau), Father Bosco (Thierry Gimonez) is the new head of the monastery. Actually he would have to take care with all his strength of the financial problems of the monastery. But his illness, which he still keeps secret, makes it more difficult for him to admit than he wants. The young candidates for the priesthood have no idea of the extent of the financial difficulties. They are primarily concerned that their comrade José (Samuel Jouy) be reinstated. The former prisoner is in a wheelchair after an apparent relapse into his criminal life and also suffers from deep depression due to his expulsion from the seminary. But the young men also have to struggle with other problems. Thus Guillaume (Clément Manuel) increasingly struggles with his homosexuality and the sensitive Yann (Julian Bouanich) also questions his vocation after an encounter with a childhood friend. But when it becomes clear that the days of the monastery could soon be numbered, the young men are confronted with completely new worries about the future...

"Dein Wille geschehe" convinces again in the second year with its mixture of sensitive drama, very authentic characters and the interweaving of important, sometimes quite explosive themes into the well written scripts. For example, the very differentiated discussion about gay marriage or the extremely exciting discussion in a pleasantly objective way about the effects of the financial crisis on the church not only offer stirring entertainment, but also certainly inspire reflection. In addition, the makers succeed very vividly in presenting the various hierarchies within the church.

This has a particularly positive effect in that it always strikes a tone that is critically questioning but never really accusing. The series wants to take as realistic a look as possible behind the monastery walls, but does not see itself as an advertising film for the Catholic Church. Rather, it shows why the church is so enormously important for many people, especially in this day and age, what its traditions mean for believers and where it offers support and refuge to many people. On the other hand, the way homosexuality is dealt with is also viewed critically. It shows in which places the church perhaps makes mistakes, does not detach itself enough from its strictly prescribed traditions, which is why many people turn away from it. The result is a very balanced overall picture, which makes the series so outstanding despite some rather conventionally knitted storylines.

Who appreciates quiet dramas, great actors, an engaging visual language, interesting themes and a thoroughly stirring staging should not miss this example of European quality television. After the end of the second season one can be curious about where the journey will go next year. Because even if the last episode would have worked as a series finale, all the viewers who have taken a liking to the series can be happy that season 3 is already in the works. Absolutely worth seeing!

Picture + sound: The audiovisual implementation of the series for the DVD is on a good to very good TV level. The picture is absolutely clean, but on closer inspection it shows a slight graining in the darker moments. This also affects the sharpness of the image, which is very good especially in brighter outdoor shots, but shows some small weaknesses in darker scenes. The sound, which is only available in a proper stereo mix, is largely reserved, but makes the dialogues sound very understandable, which is also the most important aspect for this series. But there is an unspectacular, but decent one: Gut!

Extras: Except for a trailer and a booklet there is unfortunately no bonus material.

Fazit: "Dein Wille geschehe" continues the story about the young candidates for the priesthood in the second season and shuffles the cards for the next season completely new at the end of the eight episodes. Even in its second year, the series manages very well to make the characters look absolutely real and to focus on sensitive themes again and again. The result is gripping, moving and extremely entertaining, without becoming too striking or sinking into pathos. If you already liked the first season, don't miss these new episodes! absolutely recommended!